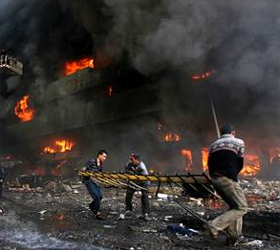 EDITORIAL (August 25 2010): On this Monday also, the merchants of death were busy as usual. They bombed a mosque-cum-seminary in South Waziristan killing 36 and injuring many more, triggered a landmine killing seven participants of a meeting of tribal elders in Kurram Agency and exploded an improvised explosive device (IED) near Darra Adamkhel taking the life of three members of an anti-Taliban force.

Given the generally inadequate medical facilities available in these places the death toll is likely to rise. That the killing spree should go on uninterrupted even during the holy month of Ramazan, that the perpetrators’ hearts should be shorn of any compassion for human life at the time of colossal national tragedy brought about by unprecedented flooding in the country, one fails to comprehend the nature of militancy in Pakistan. Who is killing whom and why the question becomes all the more difficult to answer if you factor in three missile attacks launched by the CIA, almost at the same time, which killed 16, including many women and children.

Among the victims of mosque-cum-seminary in Wana, the principal town of South Waziristan, was Maulana Noor Muhammad, a former member of parliament and a ranking leader of Wazir tribe. But he was better known for his mediatory skills and had had successfully brokered a number of standstill and peace accords between the government and the Taliban. But it was his dislike for the Uzbek inhabitants of the area, whom he wanted to leave the Fata region that had earned him hostility of rival Mehsud leadership. Who sent to him the teenaged suicide-bomber no one has claimed responsibility as yet.

Certainly, the one behind this murderous attack has no respect for the mosque, nor his spirit seems to have mellowed by the sanctity of Ramazan. The responsibility for the explosion in Kurram Agency also remains unclaimed, probably because it was consequent to a dispute over the ownership of a school. However, the Darra Adamkhel bombing has been owned by the Taliban who claimed that the Tehrik-i-Taliban Pakistan (TTP) has avenged the killing of two students of a seminary by the victims.

All four attacks tend to tell four different stories with not much common between them excepting the hard reality that the tribal area of Pakistan has become one vast jungle where there is no law except the law of jungle. While the tribals fight for turf, sectarian leaders are out to eliminate rivals, Taliban are at war with the security forces and the US-led anti-terrorism coalition is busy carrying out person-specific assassinations with missiles fired from unmanned drones.

The tribal region of Pakistan is much more than the so-called safe haven for the Taliban and al Qaeda. Naturally, it has to be targeted not by bullet alone. Before it explodes into something more disastrous it is imperative that government revisits its policy towards Fata, essentially to consider bringing it into the national mainstream. What to do now, any exercise to this effect has to be different from what has been done so far. A fresh approach is required, cashing in on the inherent sociological strength of the tribal people – Brecorder