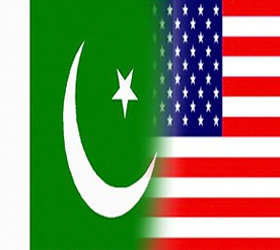 ISLAMABAD, Aug 25 (APP)-Pakistan’s Ambassador to the United States Hussain Haqqani said on Wednesday that flood relief cooperation could be a turning point in the relations between Pakistan and the United States and hoped it would help faster a much greater mutual understanding at people-to-people level.Talking to a private TV channel, Ambassador said that it was due to the government’s efforts that the international community has acknowledged the massive destruction of infrastructure in the recent floods. He said that United Nations called its session only on the request of the Pakistan government.It was wrong to say by some quarters that the government remained inactive in educating the international community about the intensity of the catastrophe, Haqqani said adding that he himself remained engaged in the US to attract attention of US authorities to the biggest tragedy in human history.

He said media could not notice the efforts of the government which it was making to attract attention of international community in this situation, he added.
Unfortunately the local media could not duly project the immense devastation, he said.
He said the floods have inflicted huge damages of the infrastructure and the process of reconstruction would involve huge resources and time.
Haqqani said the US government as well as the private sector were ambitious to extend maximum possible support to enable Pakistan to overcome the situation.
He said Americans have a history of aid activities and they have been found very generous during the crisis anywhere in the world.
Haqqani said international relations are not governed by emotions adding they are rather governed by national interests of nations.
He said after learning from its earlier mistakes the US Administration has now changed the concept of strategic interests.  They are now following a broad based policy in this regard, he added. He said it is in Pakistan’s national interest to have good relations with the US.
He said no where in the world there was an error-free government and the bad governance issue was being raised by some quarters in Pakistan also.
The international community now has a different point of view in this regard he said explaining there is a general thinking abroad and particularly in the United States that the issue of bad governance is raised in Pakistan to topple the democratically elected governments.
Haqqani said that a number of American private companies have also pledged to extend all possible support to flood hit areas of Pakistan.
Flooding disaster in Pakistan has afflicted massive number of people with misery than the 2005 earthquake and the Pakistani diaspora in the United States and Americans can greatly help alleviate their sufferings by  contributing generously to relief work, said Husain Haqqani, Islamabad’s ambassador in Washington.
He asked the people living in the United States to come forward with renewed spirit just as they did in response to the earthquake and large-scale displacement of people from Swat valley last year.
The Pakistani government and army are using all available resources to carry out the daunting rescue and relief work over huge swathes of land in Khyber Pakhtunkhwa, Balochistan, Punjab and Sindh provinces but the massive scale of work demands international cooperation, the envoy said.
He expressed gratitude to the United States Administration for providing much-needed helicopters and other critical life-saving supplies.
He said Pakistan and its people are experiencing worst natural calamity of its history, as the flood has affected approximately millions people, washed away standing crops and livestock worth billions of dollars, damaged schools, hospitals and infrastructure.
He said the devastation of the flood had not been confined to one area rather the calamity hit all the four provinces as well as Gilgit-Baltistan and Azad Jammu and Kashmir.

He thanked the US Administration for prompt humanitarian assistance in the flood relief operations.
He also appreciated the US support in highlighting the enormity of the calamity at the international forums.

He said that the public support in war against terror is equally important and could only be kept intact if the international community helps the Government of Pakistan to undertake the emergent measures to provide relief to ordinary people and undertake reconstruction projects in the flood affected areas.
He apprehended that any slackness in this context may provide an opportunity to the extremists to promote their destructive agenda by exploiting public miseries.
He expressed his satisfaction over the progress of Pakistan-IMF Dialogue and hoped that the ongoing negotiations would produce some positive results.

He  termed it as gratifying that the intelligence sharing between Pakistan and US had substantially increased in the recent past and both sides were fully cooperating in the war against terror and for restoration of peace and stability in Pakistan and its neighbor countries.
He said that Pakistan is providing all necessary cooperation to neighboring countries to eliminate the menace of terrorism.
He reaffirmed Pakistan’s keen desire to have good neighborly relations with neighboring countries specially with India for peaceful resolution of all the outstanding issues .
He underlined the fact that Pakistan had all along strived for restoration of composite dialogue with India in the larger interest of peace in this region and world at large. He also counted Pakistan’s crucial role and sacrifices in the fight against terror.
He extolled the role of Pakistan Army and law enforcement agencies which had suffered many casualties in their quest to defeat the menace of terrorism .
The speed and scale of the United States efforts, he said, have helped bolster the checkered American image in Pakistan.
He  said  that still, people in both countries America and Pakistan warned that if rebuilding and rehabilitation efforts bogged down, the militant groups would try to take advantage of it. “The real test is, can their government provide the most fundamental services? said the ambassador. Every dimension of our relationship – politics, economics, security – is going to see major shifts as a result of this historic  disaster,” said Haqqani
To a question , on the statement of MQM Chief Altaf Hussain, the Ambassador Haqqani said to express point of view is right of every individual. He said giving invitation to Army would be harmful for the country and its economy.
He said America had cleared in its law that it would neither support any undemocratic move and nor provide financial support to such undemocratic set up in Pakistan.
To another question, he said that augmentation in democratic values is must for the development and prosperity of the country and its people – APP