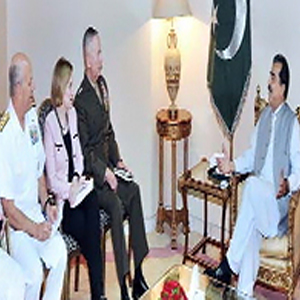 ISLAMABAD, Aug 24 (APP): Prime Minister Syed Yusuf Raza Gilani Tuesday said Pakistan and its people are experiencing worst natural calamity of its history, as the flood has affected approximately 20 million people, washed away standing crops and livestock worth billions of dollars, damaged schools, hospitals and infrastructure.He said the devastation of the flood had not been confined to one area rather the calamity hit all the four provinces as well as Gilgit-Baltistan and Azad Jammu and Kashmir. The Prime Minister, while talking to Gen. James Mattie, Commander US Central Command and his delegation who called on him here at the PM Secretariat on Tuesday, thanked the US Administration for prompt humanitarian assistance in the flood relief operations.

He also appreciated the US support in highlighting the enormity of the calamity at the international forums.
The Prime Minister said that the public support in war against terror is equally important and could only be kept intact if the international community helps the Government of Pakistan to undertake the emergent measures to provide relief to ordinary people and undertake reconstruction projects in the flood affected areas.
He apprehended that any slackness in this context may provide an opportunity to the extremists to promote their destructive agenda by exploiting public miseries.
The Prime Minister expressed his satisfaction over the progress of Pakistan-US Strategic Dialogue and hoped that the ongoing negotiations would produce some tangible results and further cement our close ties.
The Prime Minister termed it as gratifying that the intelligence sharing between Pakistan and US had substantially increased in the recent past and both sides were fully cooperating in the war against terror and for restoration of peace and stability in Afghanistan.
He said that Pakistan is providing all necessary cooperation to Karzai Administration to bring about stability in the war torn country.
The Prime Minister reaffirmed Pakistan’s keen desire to have good neighbourly relations with India through peaceful resolution of all the outstanding issues between the two countries including the core issue of Kashmir as well as the water dispute.
He underlined the fact that Pakistan had all along strived for restoration of composite dialogue with India in the larger interest of peace in this region and world at large.
Gen James Mattie, in his response, noted with satisfaction that both countries enjoy very cordial relations. He appreciated Pakistan’s crucial role and sacrifices in the fight against terror.
He extolled the role of Pakistan Army and law enforcement agencies which had suffered more than 4000 casualties in their quest to defeat the menace of terrorism and commended Pakistan for resolutely playing a pivotal role in the war against terror despite these unparalleled sacrifices.
Defence Minister Ch. Ahmad Mukhtar, Minister for Foreign Affairs Makhdoom Shah Mahmood Qureshi, Interior Minister Senator A.  Rehman Malik, Senator Sughra Imam, Secretary Foreign Affairs Salman Bashir, US Ambassador Ms. Anne W Patterson and Pakistan’s Ambassador to US Hussain Haqqani, US Vice Admiral Mike Lefever, US Rear Admiral (S) Kevin Sweeney and other senior officers were also present in the meeting.
Previous Post