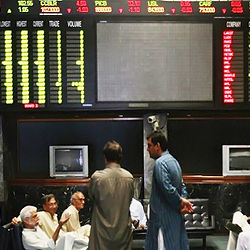 KARACHI: The dissenting note by the chairman, Karachi Stock Exchange (KSE), Zubyr Soomro, on the proposed Margin Trading Product (MTS) or the modified form of previously prevalent ‘badla’, has sparked angry response from the five member directors on the board. All of which puts the introduction of leverage product (buying on borrowed money) in jeopardy.

A member director told Dawn on Wednesday that the BOD meeting earlier scheduled for Aug 26 to dispel the chairman’s apprehensions, has been called off.

“He was not present in the last meeting and is probably in Jacobabad at this time, surveying his agricultural lands, which has further delayed the meeting,” he said.

The stock market has sunk nearly 9 per cent with a miniscule turnover of around 50 million shares a day, in consequence of bevy of bad news; the devastations caused by the floods and compounded by the investor realization that MTS may remain a distant dream.

The contents of the chairman Soomro’s dissenting note made public voiced his concern over several issues relating to MTS. Those included: No Counter Party Risk Assessment as No pre-trade disclosure; Use of shares in blocked account; Risk management; the Default Process; Legal Framework-Contractual obligations and Anti Money laundering related issues.

Chairman Soomro’s emphasis on the last — Anti Money Laundering (AML) — issues ran thus: “Given the international focus on anti-money laundering issues and our own recent legislation on this, we should ensure that the proposed product is in compliance with the letter and spirit of these requirements,” said the note, adding: “The fact is that counter-parties will not be known at the time that credit is extended to them. How then can AML due diligence be done on them before execution of the transactions?”

A letter signed by the five broker directors rebuffed chairman’s statement that he was abroad and could not study the proposal. “The excuse is not valid since the MT concept paper had been in discussion since October 2009,” the directors wrote, adding: “His stance that till he is satisfied nothing moves betrays an attitude problem and reflects that he has not even read Articles of Association, which states that all decisions taken by majority in the Board meeting will be carried and respected.”

The proposed MTS was approved by a majority of eight to two at the 10-member BOD meeting in which the chairman himself was present.

The member directors letter raised the heat: “The observations of the chairman do not merit point-wise reply because he does not seem to understand the basic dynamics of the capital market” say the five signatories to the letter adding: “To use a fashionable phrase of Money Laundering and concerns thereof, he seems to be unaware that ‘no’ investor can operate at the Exchange without UIN which is allotted by the NCCPL after getting CNIC information of the account holder verified from Nadra.”

Given the scuffle within the board, several major investors at the market thought that the MTS which had been under the limelight since October 2009 might be delayed but it was unlikely to be denied. Everyone agreed that the episode had placed the apex regulator — SECP– in an uncomfortable position.

In a separate letter to the Director SECP, the five member KSE directors respond to the apex regulator’s letter dated Aug 16 asking for “comments on Chairman’s dissent note.” The broker directors stated that the KSE chairman’s concerns completely ignored the expert committee’s report wherein all issues had been debated and resolved.

The directors asserted that the KSE management had given a detailed presentation in the meeting on July 26 where the proposal was approved by majority. The brokers reminded the SECP that the MT proposal was firmed up by the Experts Committee formed by SECP and headed by director (SE). The Concept paper was later sent to all Exchanges, CDC & NCCPL for comments. The KSE Board had decided by a majority vote in favour of the Concept Paper. But the sting of the broker directors’ letter to the SECP was in its tail: “What is surprising is that SECP, as the Apex Regulator is giving an indication that it is either not supporting the concept of MT or it is bent upon delaying it.”

Pakistan can adjust current program or opt out: IMF

Pakistan can adjust current program or opt out: IMF