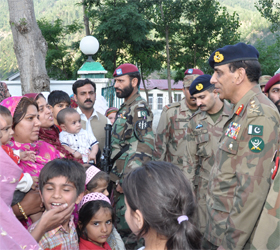 ISLAMABAD – Chief of the Army Staff General Ashfaq Parvez Kayani on Tuesday visited flood-hit areas in Multan and Kotri Barrage and reviewed rescue and relief efforts under the operation named Labbaik.
According to sources, General Kayani while talking to the commanders and troops emphasised the need for enhanced cooperation between Army and civil administration for relief and rescue activities.
He assured the flood-stricken people that Pakistan Army would not take a sigh of relief until the flood affectees reached their homes safely with the Grace of Almighty Allah.
The COAS was given briefing about the flood rescue and relief efforts by the senior army officials in Multan. On the occasion, the COAS met army officials and Jawans of United Arab Emirates and discussed operation Labbaik with them. He also lauded the gigantic services of UAE in lending a hand for flood affectees in this hour of need.
Pakistan Army continues its rescue and relief operation Labbaik in Balochistan, Sindh, southern Punjab, KP, AJK and Gilgit-Baltistan round the clock.
Army is busy evacuating the stranded people in Usta Mohammad Naseerabad and shifting them to safer places. Army in collaboration with Turkish doctors have established a modern field hospital at Dera Murad Jamali.
Three additional relief camps have been established at Mehal, Bakitiar Abad and Jahal Magsi and providing cooked flood to the flood-affected people.
Ten tons of relief items were distributed at Army relief camp at Rahimyar Khan and 6,000 marooned people were provided cooked flood.
Seven more water points have established to provide clean drinking water at Nowshera, Ganderi and Sais Mandi. C-130 sorties are providing dry rations on daily basis to Gilgit, Skardu and Chitral. Nine tons of dry rations have been transported to Chitral.
Another 65 tons of rations have been transported to Kalam through helicopters. Army Engineers have opened roads including Gilgit-Skardu, Astore-Gilgit, Gilgit-Hunza, and Gilgit-Ghizer for light traffic. Work on Dober Bridge is in progress.

IT'S OVER ELIN AND TIGER