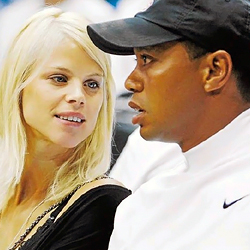 ‘‘We are sad that our marriage is over and we wish each other the very best for the future,’’ Woods and Elin Nordegren said in a joint statement released by their lawyers.

The divorce was granted in Bay County Circuit Court in Panama City, Florida, about 600 kilometres away from their Isleworth home outside Orlando. The couple had married in October 2004 in Barbados and have a threeyear-old daughter, Sam, and a 19-month-old son, Charlie.

Terms of the divorce were not disclosed, except that they will ‘‘share parenting’’ of their two children.

The divorce was finalised by Bay County Circuit Judge Judy Pittman Biebel during a brief hearing in a conference room in her chambers, according to Biebel’s judicial assistant, Kim Gibson. The hearing was very brief, only about five or 10 minutes. Both Woods and Nordegren were present, along with their lawyers, Gibson said.

‘‘I don’t comment on active cases,’’ Thomas J. Sasser, Woods’ divorce attorney, said. When asked why they chose to file in Panama City, Sasser said only it was a joint decision by the lawyers.

Woods’ agent, Mark Steinberg, declined comment when asked if they had a prenuptial agreement or terms of the settlement. ‘‘We’re not commenting beyond what was in the release,’’ he said.

The petition said the marriage was ‘‘irretrievably