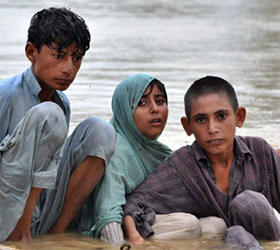 LONDON, Aug 25 (APP): The UK Disaster Emergency Committee (DEC) ran its Pakistan Floods Appeal on the front wall of Pakistan High Commission here last evening. Pakistan High Commissioner Wajid Shamsul Hasan was joined by Andrew Mitchell, Secretary of State for International Development  and Brendan Gormley, Chief Executive, DEC on this occasion.The DEC has so far collected donations to the tune of 30 million pounds sterling and its member organizations are already engaged in the relief activity in various parts of Pakistan.
The DEC informed that for the first time in its 45 years history  it had seen donations rise rather than fall during the second week of an appeal. The unprecedent pattern of giving to the Pakistan Floods Appeal, long after the appeal broadcasts on 5 August, was a reflection of growing public awareness of the full scale of the tragedy.
Speaking on the occasion, Mitchell said that the people of Britain have donated generously towards flood relief efforts in Pakistan and these contributions are making a difference in the situation on ground. Referring to his visit to Pakistan last week he said that he visited several camps in flood hit areas  and saw relief efforts aimed at saving lives and providing much needed services to the flood victims.
The High Commissioner expressed gratitude on behalf of people of Pakistan saying that the contributions made by the British government and people reflected their concerns towards people of Pakistan.
He informed that Pakistan government was undertaking all the  possible measures to save the lives of people and the timely rescue operations by the Navy, Army and Air force have helped in  keeping the human lives loss very low as compared to other disasters of this magnitude Disaster Emergency Committee Chief Executive Brendan Gormley said:
“It is sometimes harder to fully appreciate the impact of disasters such as floods that take longer to develop. However, the response of UK public to the floods in Pakistan has been extraordinary. We have never seen anything like it in our 45 year history.”
He further said that this is a tragedy unfolding in slow motion  with new areas still being flooded and the threat of deadly water  borne diseases arising for millions of survivors. The full impact of  the disaster will only be revealed when flood waters finally recede   and the extent of devastation is uncovered.
Previous Post