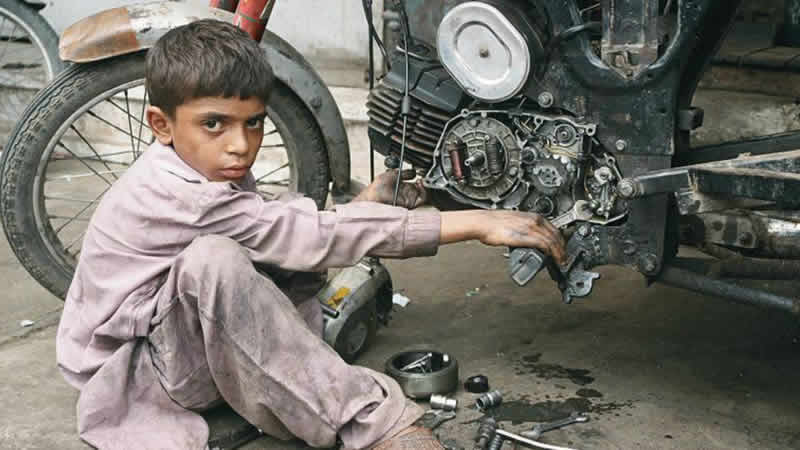 Weak shoulders of a 5-year-old are carrying a heavy sack of bricks, where a school bag should be. Child labor has been prevalent in sub-continent far before the creation of Pakistan.

On 14 August 1947, Pakistan adopted this ill as part of heritance and continued to let it thrive. Millions of children are forced into manual labor which results in physical as well as emotional trauma. Pakistani children are employed in service and manufacturing industries. They work more than 12 hours a day in squalid conditions for a small wage, children start working from the age as young as 5. In addition to the mental and physical stress, the children involved in child labor have no time to attend schools.

The untapped potential of the young minds result in the low literacy rate in the country. Poverty is one of the main reasons for child labor. In Pakistan, the living standards is low and the increasing prices make it hard for the bread winner to manage the expenses of the household alone. Families are bigger with more dependent members; hence the children are forced into manual labor in order to support their families. Moreover, the education system is weak and the laws inefficient hence the school drop-out rates are high. 25 million children in Pakistan are out of school out of which the majority are involved in child labor. Factories employ children at a low rate for more hours, they are also less likely to retaliate against the unfair treatment.

Multan is the hub of manual child labor, it is also being practiced in other cities such as Hyderabad, Sialkot etc. The factories are stuffy, dirty and extremely dangerous, children are exposed to all sorts of hazards as they are ill equipped for the job. The government has introduced laws to restrict child labor and promote education however there is little or no enforcement to ensure that these laws are implemented. In fact the last National Child Labor survey was conducted 21 years ago in 1996 by the Federal Bureau of Statistics. This shows that the government is least concerned with the matter. Child labor restricts the ability of an individual to grow and learn, deprives the children of their basic rights. Young children are separated from their families, tortured and exposed to many threats. The government must take an action and stop the future of our nation from being wasted away in factories.