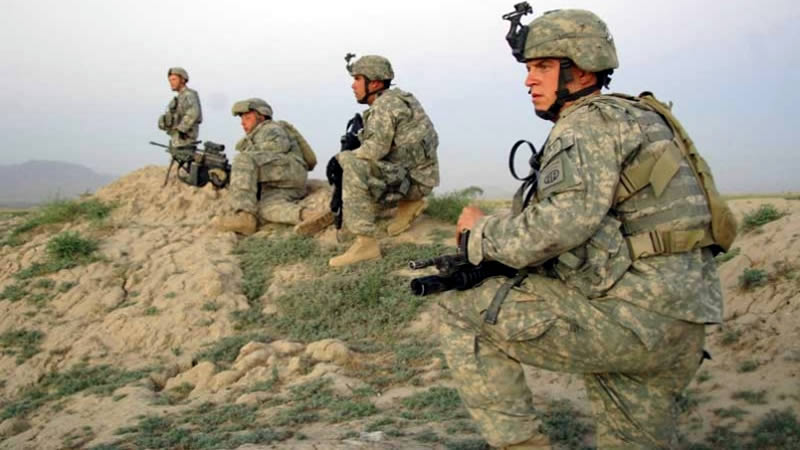 In May 2014, President Obama announced that the number of the US troops in Afghanistan will be cut down to 9,800 by the end of 2014, then cutting down half again in 2015 and by the end of 2016, it will only comprise of an embassy in Kabul accompanied with a security assistance office.

This new order will ensure a very small deputation of US troops that will be countering the terrorist activities against the Al Qaeda and the Taliban in Afghanistan.

After this withdrawal of the US troops from Afghanistan, the newly elected Afghan regime will control the state and all the matters related to internal and external security of the country. Now the question arises whether the newly elected Afghan government is competent enough to handle the most problematic state of the region after the US troop’s withdrawal? This question has raised many concerns even in the US, whether this withdrawal is dragging the already feeble state of Afghanistan towards the edge of as the failed state? To study the post US Afghanistan, first we have to analyze that how much effective control of the Afghan government is over the whole state. Despite having the control over the 34 provincial capitals, Afghan government forces are facing a lot of problems in the region. These forces are basically of the ethnic minorities of the North, fighting against the Southern ethnic majority terrorist groups. Causality rate is growing day by day and the members of these forces are mainly targeted. They lack the basic resources to fight against these terrorist organizations even after receiving the aid of more than $4 billion in 2014.

A country where 60% of the GDP is coming from the foreign aid, 30% from the illegal activities and narcotic trade and only 10% from the legitimate economy, will be left by the US. The condition of the social and political structure of this state is even worse. The fragile structure of the state can crumple into a failed state overnight apparently because of the civil friction. The government in Afghanistan has no de jure control over the whole territory. It is indeed a weak government with a widespread corruption and the ethnic and tribal commitments of the rulers. Their major aim is to gain power and access to the resources of the region, in order to strengthen their tribe. For such an aid dependent state, a bilateral security agreement with the US may hold up the occurrence of a failed state for a time being but it is not practical without initiating any peace efforts. This initiative must be favourable for both the states. It is the very need of time because the US troops will soon be leaving Afghanistan. Due to a very weak and ineffective government, this troop’s withdrawal will surely cause a power vacuum in the country. Highly extremist non state actors like Taliban, will seek the advantage of the situation and will try to fill up this vacuum, created by the US withdrawal.

If they somehow manage to take over the government in Afghanistan, they will first push the foreign troops out of the country to isolate it and have a full control over the whole territory. Afghanistan will become a safe haven for Taliban and a hub of global terrorism for the rest of the world. What will happen after that? Will US come back to Afghanistan and start the war all over again? Will these Taliban be able to put the global peace at stake? Is there any other solution to have a peaceful Afghanistan? These questions are arising as the US troops are withdrawing from Afghanistan. By keeping in view the whole situation, let us assume some possible scenarios in Afghanistan post US withdrawal from the region.

1. Taliban will form a coalition government with the new regime of Afghanistan

This can be a good omen for the peace building process of Afghanistan. By having this type of government, there will be fewer confrontations between the government and the Taliban regime. But due to extreme ideologies of Taliban, there will be more human rights violations and very less participation of Afghanistan in the International System. In short, Afghanistan can be in deep isolation having worse human rights violations condition.

2. Neighbouring countries will try to fill the power vacuum

If US will stop its military and economical aid to Afghanistan, then there is a possibility that a civil war in the country will break out. Situation of extreme lawlessness will drag other regional actors into the clash. Extreme bad situation can occur if different Afghan tribes will be used as pawns by these regional actors. Thus everyone will fight for the regional influence irrespective of the situation in Afghanistan. If any of these scenarios will come true, then it will ultimately drag Afghanistan towards the status of the failed state. It can be said that it is already a failed state having no obvious influence of the government on the region. Regional actors are playing their games in Afghanistan; different groups are fighting to gain maximum control of the region and with the added ingredient of foreign intervention Afghanistan has become a core of proxy wars. Presence of USA, if on one hand is causing no benefit to Afghanistan then on the other hand it is somehow filling the power vacuum of the region.

As soon as they will leave Afghanistan, we will see a lot of hidden forces will rush towards Afghanistan to fill this vacuum. In this situation, we can say that everybody wants the US to leave Afghanistan, but actually nobody wants it. The reason is the repercussion of the aftermath of US withdrawal in Afghanistan. Now when the US has planned to leave Afghanistan, it will be of the larger concern for Pakistan that what will be the fate of Afghanistan? Every situation of Afghanistan directly affects Pakistan because of their contiguity and the porous border between them. Pakistan is already facing a lot of cross border problems mainly from the Western borders. Withdrawal of the US forces will pose a new challenge to Pakistan and its security as well. New security and foreign policy will be devised by the regional states because there is still uncertainty that what will be the future of the post US Afghanistan will be.