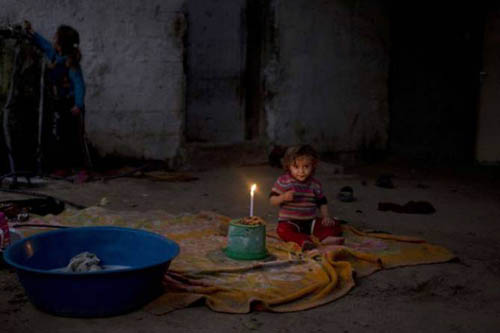 “The lamps are going out all over the Middle East”, to update Sir Edward Grey’s doom-laden warning to Europe a hundred years ago. The areas of calm and stability seem like small oases in a multitude of firestorms. Many areas are literally without lights.

Gaza has around two hours electricity a day. The power cuts in Yemen are worse and worse, leading to major protests. But, more worryingly, the lights of the democratic, liberal, pluralistic forces that for many months in 2011 lit up the region are also dimming, overshadowed by the twin forces of brutal dictatorship and brutal religious sectarian extremism. Syria and Iraq are divided and near ungovernable, in the waiting room for failed-state status. The so-called Islamic caliphate or Isis, which in reality bears no resemblance to any caliphates of the past, covers an ever-expanding area, larger than the United Kingdom, including 35 per cent of Syria.

Libya is being terrorised by rival militias. Palestinians in Gaza, for the fourth time since 2006, are at the wrong end of an Israeli military aggression that pits one of the world’s most sophisticated militaries against a captive population inside the world’s largest prison. The collective pile of rubble from these conflicts would grace a mountain range. Those states and areas that enjoy calm become refugee camps. Lebanon and Jordan host almost two million Syrian refugees between them, as well as 2.5 million Palestinians. Tunisia is confronted with a mass Libyan exodus; while Iraqi Kurdistan is home to more than 300,000 Iraqis displaced only since June, as well as 220,000 Syrian refugees.

In each case, the numbers are rocketing up – with the number of Syrian refugees alone expected to reach four million by the end of the year. Each humanitarian appeal is underfunded. Will it get worse? The signs are worrying. The fighting in Lebanon last week, in Arsal in the north Bekaa valley, is yet another example of why the Syrian crisis threatens to move from spilling over, to swamping, its smaller neighbour. The instability could spread to Jordan. Saudi Arabia and the Gulf states will not be immune to the regional changes.

Given the epidemic of crises in an area of the world vital to our trade, energy and security interests, the minimal expectation would be an energetic and engaged response. Yet, when asked about Western policy towards the region, my instinctive response is, “There is one?” The failure is first and foremost one of leadership, at an international and regional level. Who are great international statesmen in the West or in the Middle East? Who do young Arabs, who make up most of the population, look to for inspiration? President Obama has been blasted for his indecisiveness but he is not alone. George W Bush and Tony Blair were decisive over Iraq and destroyed the country. There is no strategy, and often the debate is reduced to a question of to bomb or not to bomb.

The leadership deficit is reinforced by an inability to assess the situation. Barely anybody, including in the region, predicted the uprisings of 2010 and 2011. The speed of Isis’s seizure of major Iraqi cities, especially Mosul, shocked all. It points to a lack of trained people on the ground and a complacent groupthink which fails to appreciate that the comfortable regional order of dictators and all-powerful monarchs is at an end. Politicians, diplomats and the media struggle to focus on more than one crisis at a time. As the focus turns to Gaza, Syria and Iraq are ignored – just as Gaza was two months ago.

More than 1,700 Syrians were killed in one week in July – the most deadly since the uprising began. Every one of these crises merits full-scale attention. Worse, states duck the problems, as they did over Iraq for years and risk doing now over Libya, even as embassies in Tripoli are evacuated. Reactions are slow and ponderous. How often do international actors address a crisis only once it has reached the status of too tough to resolve. With Syria, it was almost a year before Kofi Annan was appointed a United Nations envoy, by which stage the situation was so violent and polarised his options were constrained. As it stands, there is no political process to try to resolve the worst crisis in the region. In Iraq, President Obama has just ordered limited strikes on Isis – but these come after it has committed massacres, acquired a formidable arsenal and a bank balance in the billions.

Where is the strategy to defeat this new menace? The rise of Isis was facilitated by Nouri al-Maliki’s divisive sectarian approach which allowed Isis to ride a wave of Sunni Arab despair. This is backed up by a short-sighted approach of always picking “our man” (always a man) or “our group”. In Libya and Syria, the West set about anointing sole legitimate representatives of their peoples as if this was the right of Washington, London and Paris, rather than the peoples involved. Colonial mentalities die hard. Just at the point when a cohesive response was vital, the permanent members of the United Nations Security Council embarked on a new cold war over Ukraine, thus rendering itself impotent.

The conjunction of the Ukraine crisis and the end of the Geneva II talks on Syria smashed vestigial hopes of political progress, with Russia instructing its proxy not to concede an inch. Major regional powers are indulging in their own dangerous rivalries, often petty and personal. The Middle East cold war causes Saudi Arabia to confront Iran in practically every crisis. Qatar and Saudi also pursue their own rivalry. Egypt, Saudi and the UAE are engaged in a fruitless, counterproductive war of their own against the Muslim Brotherhood and its backers. The myriad failings of the Brotherhood do not warrant foolhardy attempts to wipe them out. The choice offered to the peoples of the region is the false one of authoritarianism or brutal extremist chaos. This is deliberate. Every regime requires, even promotes, a truly awful opponent.

Bashar al-Assad has found Isis useful to scare Syrians, as has Mr Maliki in Iraq; for Abdel Fattah al-Sisi in Egypt, it is the Muslim Brotherhood; and for the Israeli government, it is Hamas. All too often it is a winner-loser scenario, where force is justified to gain outright victory. The largest losers have been those who espouse the very values the West claims to support. All the pluralistic, democratic and liberal forces in the region have been crushed. Back in 2011, US and European ministers proclaimed their support for peaceful Arab protests but let every one down, handing the field to counter-democratic forces, sectarian extremists and men of violence. The West has simultaneously deserted its proclaimed values and endangered its interests. The situation can be turned around – but the flickering lamps will be kept alight only by a clear-sighted, well-informed and united international strategy.–Independent. -nation

China To Send Orbiter To Moon and Back