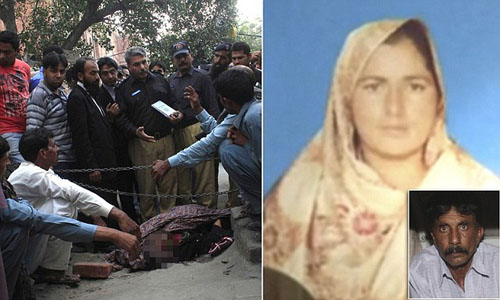 Pakistan has become a very dark place indeed. We have all heard of the term ‘honour killing’ where women have been and continue to be murdered at the whims of the men in their families — it is a blood red stain in our culture. However, the brutal and primal way in which Ferzana Iqbal, a 25-year-old woman, was murdered on Tuesday in broad daylight outside the premises of the Lahore High Court (LHC) by her brother, father and former fiancé means we have hit a new low.

What was her crime? To love and marry a man of her own choice. She was first shot and when the bullets did not do the job, the ghastly men of her family swung bricks at her and pelted her with stones. She died right there, outside the citadel of justice in Lahore and the crowds stood idly by, transfixed by the violence on show. The policemen who were milling around  did not budge from their spot while the spectacle was occurring, preferring to let the family ‘sort out’ the issue themselves. Her husband was there begging the police to help but they did not heed his calls. To add another heartbreaking dimension to this story, Ferzana Iqbal was three months pregnant, making her killing a double murder.

The brutality of this murder and the visible abundance of ‘bystander apathy’ — when folk nearby prefer to remain silent spectators instead of intervening to stop the injustice — has outraged a large portion of civil society in Pakistan and the international community. We live in a land where conservatism, patriarchy and tradition have dictated archaic laws and venerated tribal codes. We have allowed men to barter the fate of women and to deal death blows to those they are unhappy with, particularly in cases of marriage. Many women have no say in the matter of marriage and if any dare to choose their own husbands, a fate similar to that of Ferzana’s awaits them.

Hundreds of women in Pakistan are made to pay the ultimate price annually but stoning still remains a very rare method of punishment. Ferzana’s death and the hue and cry it has generated must act as the catalyst for change in the condition and lot of women here. Too often, men accused of honour killing are let off the hook; it is very rare that they are duly punished for what is the ultimate crime of murder. This impunity must come to an end. All of Ferzana’s attackers, with the exception of her father, have escaped but this must not be allowed to happen. We cannot show the world that we are alright with the public execution of a woman and her unborn child; we cannot show them that we have stooped this far.  -dailytimes