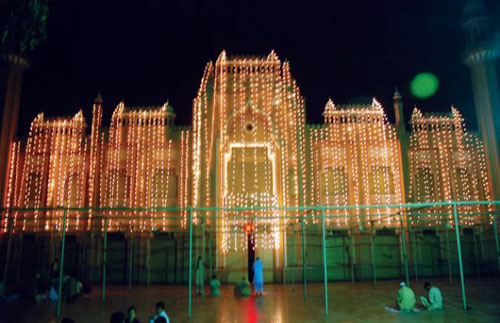 Shab-e-Meraj, the night when the Holy Prophet Muhammad (PBUH) ascended to the highest levels of heavens, would be observed Monday night across the country with religious devotion and traditional fervor.

On Shab-e-Meraj, night, the women devotees arrange special gatherings inside their homes for offering special prayers all the night, whereas males offer prayers in specially decorated mosques, homes for seeking the blessings of Allah and pray for welfare of the entire nation and the Ummah. During the gatherings, Islamic scholars highlight the importance of the day and its blessings. Different Islamic and socio-cultural organizations have arranged special prayers and Mahafil in mosques and at other places Monday night to seek blessings of the Almighty.

The Muslims every year on 27th Rajab-ul-Murajab (Islamic calendar) observe Shab-e-Miraj in which the Holy Prophet (PBUH) went on a special journey to meet Allah Almighty, crossing seven skies on the heavenly animal named ‘al-Buraq.’ The word Meraj is derived from Arabic word Urooj, which means ‘height,’ or ‘ascension.’ During Meraj, the command for five daily prayers (Salat) was also given to the Holy Prophet (P.B.U.H). – SAMAA