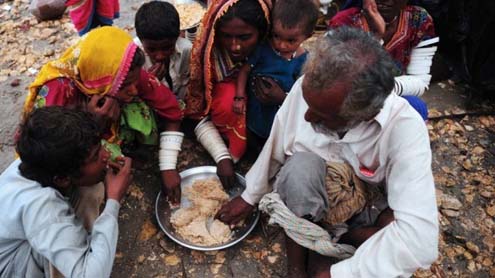 NEW YORK: According to a new ranking released by Oxfam, Pakistan ranked 97th in a list of 125 countries with regard to availability, quality and affordability of food and dietary health.

The listing means Pakistan is one of the countries with the most unhealthy and scarce food. Oxfam is an international relief and development organization that looks for practical and innovative ways to raise people out of poverty and blossom.

The index looked at the percentage of underweight children, food diversity and access to clean water, as well as negative health outcomes such as obesity and diabetes. India got the same rank as Pakistan. African nations, along with Laos (112), Bangladesh (102), were predominant in the bottom 30 countries. Chad came in last on the list, behind Ethiopia and Angola, in the food index.

Burundi (119), Yemen (121), Madagascar (122) and India have the worst rates of nutrition and the most underweight children, according to Oxfam. The Netherlands nudged past France and Switzerland as the country with the most nutritious, plentiful and healthy food, while the United States and Japan failed to make it into the top 20.

“The Netherlands have created a good market that enables people to get enough to eat. Prices are relatively low and stable and the type of food people are eating is balanced,” Deborah Hardoon, a senior researcher at Oxfam who compiled the results, said in an interview.

“They’ve got the fundamentals right and in a way that is better than most other countries all over the world.”

European countries dominated the top of the ranking but Australia squeezed into the top 12, tying with Ireland, Italy, Portugal and Luxembourg at No. 8. The United Kingdom failed to make the top 10, tying for the 13th spot, because of the volatility of its food prices compared to other goods, which Oxfam said is on a level with Peru (51), Malta (33) and Kyrgyzstan (65).

Although the United States has the most affordable and good quality food, high levels of obesity and diabetes pushed the nation into 21st place in the ranking, tying with Japan, which scored poorly on the relative price of food compared to other goods.

The Netherlands got top marks for its low food prices and diabetes levels, while Chad had the worst score for the cost of food in the country and the number of underweight children – 34 percent. The only countries where food is more expensive are Guinea and the Gambia, which were both at the lower end of the ranking.

Oxfam said the latest figures show 840 million people go hungry every day, despite there being enough food for the hungry. It called for changes in the way food is produced and distributed around the world.

The causes of hunger, it added, include a lack of investment in infrastructure in developing nations and in small-scale agriculture, security, prohibitive trading agreements, biofuel targets that divert crops from food to fuel and the impact of climate change.

Research suggests that climate change could raise the number of people at risk of hunger by 20 to 50 percent by 2050, according to the group. “This index quite clearly indicates that despite the fact of there being enough food in the world we are still not able to feed everybody in all the countries around the world,” said Hardoon.

“If we had a more equal distribution of wealth and resources, and particularly food, this wouldn’t be a problem,” she added. -tribune


Oxfam compiled the data between October and December 2013 using the latest information from the World Health Organisation, the Food and Agriculture Foundation, the International Labour Organisation and other international organisations.

The index provides a snapshot based on the relative differences in various countries based on the number of factors. But Hardoon said it is not the comprehensive picture of any one nation.