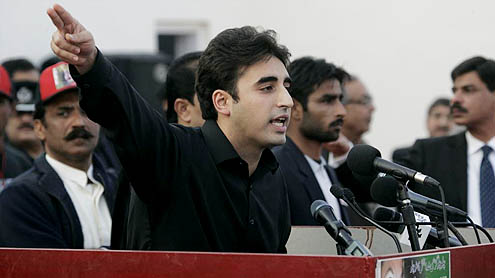 In an Emotion-laden speech at the sixth anniversary commemoration of the Karsaz, Karachi bomb attacks on late Benazir Bhutto’s procession, her son and political heir, Chairman of her PPP, Bilawal Bhutto Zardari struck a combative note out of synch with the implicit political culture and code of behaviour that has characterised politics over the last five years.

That culture of tolerance and by and large moderate expression when speaking of political rivals took root because the PPP under co-Chairperson former president Asif Ali Zardari followed the philosophy of Benazir Bhutto of reconciliation. This was reciprocated by the main opposition party, the PML-N of Nawaz Sharif, as well as other political parties. However, this reconciliatory approach, apart from other factors such as cronyism trumping merit under Zardari’s leadership and the attack on the previous government from various directions including state institutions such as the superior judiciary, could not prevent a debacle for the PPP in the 2013 elections. Arguably, it may even have contributed to it since the PPP government was perceived as taking ‘lying down’ all that was said and done against it. Now if the young Bilawal thinks it time to move away from the ‘softly, softly’ approach of his father and take the fight to his opponents, this speech may mark that turn away from his late mother’s conclusions towards the end of her life.

Bilawal lashed out at three parties he obviously considers his main rivals: the PML-N, PTI and MQM. He issued a war call for ‘hunting the tiger (the PML-N election symbol) that slakes its hunger with the blood of the poor’. He trashed PTI’s Imran Khan as being “cowardly” in his approach to the terrorists, citing the apologia offered by him while standing outside the Christian church in Peshawar where worshippers were massacred by the fanatics. Regarding the MQM, he stated tongue in cheek that Karachi was still ruled from London (a swipe at Altaf Hussain). In contrast, he referred to the courage and sprit of sacrifice of the PPP leadership and its workers. The PML-N and MQM’s terse and brief response to Bilawal has been somewhat dismissive, alluding to the political ‘immaturity’ of what appears to be the formal launch of the latest Bhutto to enter the political fray. Bilawal has expressed his intention to run in the next (2018) elections, having attained legal age, or perhaps sooner through a by-election to get him into parliament. Bilawal’s vow to conduct a jihad against the extremists only serves as a reminder of the failure of the PPP government to effectively counter the terrorists while in power.

Sindh Information Minister Sharjeel Memon and others of the PPP have asserted that the Karsaz bomb attack site was ‘washed clean’ of evidence, much as the Liaquat Bagh site where Benazir Bhutto was assassinated was hosed down before any forensic investigation. While the claim about Karsaz is new, if true it would point to a pattern the Musharraf government adopted to cover up the crimes against Benazir and the PPP after her return, a cover up that reinforces suspicions about Musharraf’s role in these events. However, while the PPP complaints of a cover up have weight, its own efforts to uncover the conspiracy that took Benazir’s life while in power over the last five years were, to put it politely, inadequate. Bilawal’s targeted parties, the PML-N and MQM, in their riposte to him have taunted him and his party for their inability to bring the murderers of his mother to justice despite being in power for five years.

The PPP’s crisis and dilemma rests on its efforts since the 1990s to reinvent itself, no longer as the party wedded to a radical change in favour of the poor and the people in general, but as a centrist ‘garden variety’ party acceptable to the establishment. While Benazir Bhutto had the charisma and political savvy to pull off this trick to some extent, her husband and successor lacked in these departments. The party ended up falling between two stools, its past and its present, with disastrous consequences. One reflection of that fate is how the 2013 elections have seen the only remaining all-country party being reduced to a provincial rump, much in line with how all other parties in the political spectrum now appear. Bilawal spoke with pride about the PPP’s jiyalas (committed workers), but these poor souls never even got a look in at the leadership of the party under Mr Zardari. It is a great challenge for the young leader of the party to resurrect the spirit of the PPP’s workers to reset the party on the path of revival and a better future. *

The Law Minister of Khyber Pakhtunkhwa (KP) Israrullah Gandapur has been killed in a suicide attack while he was greeting guests at his home in Dera Ismail Khan on the first day of Eid. At least eight people died along with him. Though celebrations have become few and far between in the country, those left are also visited by terrorism. Since the state has lost the capacity to deliver a decisive blow to the enemy, it has become easy for the terrorists to target and get away with the crime. Knowing that the situation is precarious, especially in KP, the PTI government is behaving as though it is business as usual. The same slack attitude is on display as far as security arrangements throughout the country are concerned and no effort has been made to develop the national security policy on terrorism. For palpable reasons, now that the Pakistan Tehreek-e-Insaaf is getting the direct flak, its KP Chief Minister Pervez Khattak seems to be finally coming come out of the illusion that dialogue could bring the terrorists in from the cold. He has now decided to make some concrete plans to combat them. In the cabinet meeting called immediately after the suicide attack on Gandapur, the KP government has decided to create an anti-terrorist force and recall the Frontier Constabulary from the federal government. So much for the insistence of the KP government to send the army back to barracks from the area.

Since it has become apparent that dialogue cannot be pursued as the lone strategy to tackle terrorism, it is time to define the modus operandi required to combat it. How many more lives and how many leaders do we wish to sacrifice before we are convinced that we are not facing any political opposition movement, but a terrorism movement, bent on enforcing its blinkered, narrow and literalist Islamic views on us. Even though the government had planned to talk things out with the enemy, still it was unprofessional and inappropriate not to have a Plan-B in case the hardline elements (as there usually are in such cases) within the Taliban do not respond. Pakistan is now portrayed as allowing its citizens to be killed and places all over the country hit any time. This is perceived as the state having lost its writ, and with that the impression gains ground that it could not do anything against its enemy. In such circumstances, it is difficult to bring the terrorists round to the viewpoint of the government through dialogue. Therefore, as Prime Minister Nawaz Sharif has rightly put it, it is time to establish the writ of the state to instil the fear of God in the enemy that they could be routed if they play dirty against the state. *

Donation to PM’s Fund for Affectees of Earthquake in Balochistan

US to use Romanian Air Base for Afghan Pullout

US to use Romanian Air Base for Afghan Pullout