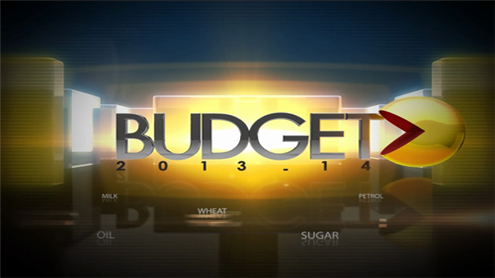 Against a backdrop of an economic meltdown, power crises of an unprecedented proportion and a fiscal position in total disarray, Finance Minister Ishaq Dar presented the federal budget for fiscal 2013-14 with an outlay of nearly Rs 3.6 trillion. Revenue receipts have been estimated at Rs 3420 billion, an increase of 21 percent over the present fiscal.

Transfers to provinces would increase by 23 percent to Rs 1502 billion, leaving Rs 1918 billion with the federal government as net receipts that denote a 19 percent increase over the current year. The total expenditure has been estimated at Rs 3591 billion, an increase of Rs 14 billion over the current year. This budget should not be viewed as an exercise in balancing income and expenditure but as an economic policy statement in fulfilment of the PML (N) manifesto, Dar stressed.

The economic vision of the government is (i) self-reliant economy; (ii) market economy driven by the private sector with government oversight and regulation; (iii) government would only be involved in projects that are beyond the capacity of the private sector or in areas where they are not attracted; (iv) everyone must contribute; (v) government to live within its means; and (vi) poor and lower middle class sections of society to be protected.

There is no doubt that the present government has inherited a broken economy: whether it is economic growth or prices, be it revenue or expenditure, public debt or circular debt, monetary expansion or interest rates, exchange rates or foreign reserves. Everything is in a shambles. The growth rate averaged at 3 percent over 5 years with inflation at 13 percent per annum on average. The rupee to US dollar parity plummeted to around Rs 100 from Rs 63 to a US dollar with fiscal deficit at an average of 7 percent per annum.

One of the major problems that the PML (N) government faces is the acute electricity crisis and hardly a day goes by when the people, particularly the poor and the lower middle class, are not out on the streets to vent out their anger at chronic power outages. The fiery speeches by PML (N) leadership particularly by Shahbaz Sharif, during the election campaign, have raised their hopes beyond realistic levels. Although, Nawaz Sharif has on more than one occasion after the elections tried to tame their expectations but their enthusiasm and faith in his ability does not subside and they continued to look up to him to provide relief.

The budget strategy, according to Dar is based on (1) reduction in fiscal deficit, that from the present level of 8.8 percent is targeted to be brought down to 6.3 percent next year and ultimately to 4 percent in three years; (2) keep inflation in single digit in the medium-term; (3) reorganisation of the debt management office; (4) reduction in untargeted subsidies; (5) power crisis to be resolved with circular debt to be settled in 60 days; (6) mobilisation of external resources through sale of 3G cellular phone licences, privatisation of government shareholding in business entities and recovery of outstanding privatisation proceeds from Etisalat; (7) increase in employment opportunities; (8) reforms in public sector enterprises to make them profitable and free of political interference; (9) protection to infirm segments of society; and (10) increased investment in the economy. These are indeed laudable targets and undoubtedly have been set in earnest.

In reducing expenditure the prime minister has led from the front by significantly curtailing the expenditure budget for his secretariat and residence. The special discretionary development fund that the previous government had instituted for the prime minister under which the then prime minister Raja Pervez Ashraf spent Rs 42 billion has also been abolished. The total number of ministries/divisions at the federal level have been curtailed and restricted to 40. This in our view needs to be reduced further, especially after the passage of 18th Amendment that has devolved a lot of functions to the provinces.

Dar has long been critical of the abolition of Wealth Tax by the Musharraf/Shaukat Aziz government, although this tax penalised investment and savings to the detriment of the national need to augment savings and investment to obviate the need for borrowings to finance development and growth in the economy. A new levy at the rate of 0.5 percent on investments and savings has been introduced in this budget by appealing to the religious zeal and patriotic fervour of the people. It has been stated that proceeds from this levy will not go to the federal fund but would be directly transferred to the National Income Support Programme (Benazir Income Support Programme) for the needy that has been increased by 20 percent from Rs 1000 to Rs 1200 per month per person.

The intentions may be good, even noble, but the fact remains that assets are being taxed and not income. This may not be congenial to raising the investment to GDP ratio from 14 to 20 percent. To say that it may be treated as a ‘religion card’ but it needs to be reminded that there is an order by the honourable Supreme Court that Zakat, which is a compulsory religious levy, cannot be mandatorily collected by the government. We are also reminded of the Iqra surcharge or Education Cess on all imports that the late Dr Mahbubul Haq had imposed in one of the budgets that he presented, with an assurance that collection under this head of account will not go to the federal fund but will be spent on education. An equally noble cause indeed as helping the needy, but what happened later on is something best not dwelled upon.

Banking secrecy too has fallen victim to this budget. The law has been amended through the Finance Bill and will have a significant impact on bank deposits and transactions. We fear that it may lead to informal banking and a significant increase in cash transactions within the economy. The target for containing inflation is likely to be upset by the concept of pass-through that has been in vogue for over a decade with regard to POL, gas and electricity prices/tariff as they are adjusted throughout the year and the federal budget does not have to cater to them except when, for political reasons the government decides not to pass on the increase or the decrease to improve its fiscal position.

One of the important elements of the PML (N)’s Tax Reform Strategy in its manifesto is that there will be no increase in tax rates and subsequently they will be reduced to attract foreign direct investment. This promise with the people made before the elections has been thrown out of the window by increasing the base rate of sales tax from 16 to 17 percent and an increase in the maximum slab of income tax on businesses owned by individuals and association of persons from 25 percent to 35 percent in one go. This deviation from the manifesto, that is akin to a contract with the people does not augur well for the credibility of Nawaz Sharif government.

The initiative to train youth with four years of university education by offering them a one-year training programme in public sector enterprises and government departments with a stipend of Rs 10,000 paid by the government and vocational training to individuals of eight years schooling to be able to acquire a profession and be able to secure jobs within and outside the country are a much desired initiative. This investment in the future of the country will bear fruit in due course.

Dar has been in office for barely a week and in all fairness has not had much time to really come to grips with a plethora of monumental challenges that the country and its economy face. This in our opinion has provided a Godsent opportunity to the Federal Board of Revenue (FBR) to incorporate its wish list of measures in the budget. It had long contested the banking secrecy law and how it was an impediment in their efforts to collect revenue. The FBR is addicted to easy pickings even if it is damaging to economic activity. A classic example of their desire to collect revenue without effort is the levy of advance tax of Rs 2 million on satellite news channels at the time of their annual renewal of licence when the licence renewal fee itself is Rs 1 million.

It appears that FBR is least bothered that this lethargy and inertia on their part is tearing to smithereens the raison d’etre of income tax – as bulk of this tax should be collected with the tax returns and not in advance. Also there is little or no realisation in FBR that though such measures make their work easy but provide more opportunity to the corrupt to abuse the system and line their pockets when taxpayers seek refund of excess tax paid because of an all encompassing withholding tax and excessive advance tax regimes. This may have a devastating effect on taxpayers to the detriment of the economy and the credibility of Nawaz Sharif who has always enjoyed the confidence of trade and industry and indeed the common man. – Brecorder