Blasphemy and our minorities 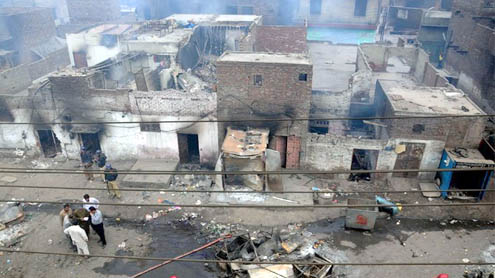 Blasphemy and our minorities

It is with deep sadness that one contemplates how 2013 is turning out to be one of the worst years for minorities in Pakistan’s sordid history of sectarian violence.

Militant ire has been directed at the Shias throughout the first three months of this year and now mob frenzy has bared its teeth at a Christian colony in Lahore. On Friday, a rowdy and angry crowd of the ‘faithful’ gathered after being told of allegedly blasphemous remarks passed by a resident of Joseph Colony in the Badami Bagh area. The accuser led the mob of some 2,000 people to the man’s house and, upon not finding him, they spread their terror throughout the neighbourhood, forcing all the residents, particularly women and children, to flee. They did find the accused’s father and brutally beat him up.

They dispersed only when the police promised to register a first information report (FIR) against the accused — without any proof whatsoever, one might add. This is not the sorry conclusion. Even after all this commotion, this violent and obviously militant crowd made its way back to the colony the very next day, Saturday, with a mission even more sinister. They reached the Christian residential area and burned to the ground 150 homes, destroying in moments of irrational aggression the lives and assets of many Christian families. Just how these vigilantes were able to return to the scene of the crime the next day without any obstacle in their path is mindboggling.

There was not a single law enforcement officer present in Joseph Colony — an area under obvious threat after Friday’s events — which is why this mob found it easy to ransack the place and set ablaze the homes of so many Christians. How on earth could this happen? It seems as if the government in Punjab is either complacent about the goings on where such ‘defenders of the faith’ are concerned or are just indifferent to the plight of the minorities. The negligence on display is what led to this looting and destruction.

The Christian minority has reacted. On Saturday, hundreds of protesters stormed Ferozepur Road in Lahore and different areas in Karachi, demanding that something be done about this unforgivable act. In Lahore, they attacked an office of the Metro Bus System and in Karachi, Rangers had to resort to aerial firing. However, this was the first time one has really seen a minority in Pakistan fighting back. Pushed into a corner after repeated attacks — the Gojra incident in 2009 still sends a shiver down one’s spine — the Christians turned to violent protests themselves, burning tyres, smashing bus windows, etc, to show that they had had enough.

Meanwhile, Chief Minister Shahbaz Sharif has announced Rs 0.5 million as compensation to the victims but this is not all that is needed. What is necessary is an adequate safeguard for the rights of minorities. The fact that any Tom, Dick or Harry can accuse anyone of blasphemy without any sort of evidence to back up the claim is what is leading to this insanity in the name of religion. It is so simple and the results are so murderous that the very suspicion of blasphemy is enough to make one cower in their boots. Usually, this country’s minorities are targeted and most of the time the accusations are bogus — revenge, hidden agendas and provocation are the only reasons blasphemy accusations are so common, and nothing is done to stop them.

Forget about the idealism of fixing or reforming the blasphemy laws, this nation’s people must reform their mentalities. The governments, provincial and federal, must wake up from their slumber and help our minorities against this targeted abuse and mayhem. Anyone can rent a crowd in Pakistan and have free licence to become rabid if blasphemy is even mentioned. This is ridiculous and it is high time that the government bring to book all those responsible for the Joseph Colony rampage. If they do not, no one will be safe. – DailyTimes