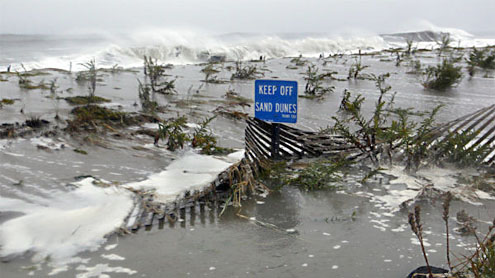 In what is being called “the perfect storm” — labelled so after the hugely devastating storm that hit the US east coast in 1991 — the US’s eastern seaboard is today in the path of havoc and destruction.

Making its way towards the east coast from Cuba and Jamaica, Sandy is a modern day tsunami, one that meteorologists are scared could match the intensity of the 2004 ocean earthquake and tsunami that devastated 14 countries and caused widespread damage and loss of lives. So far, Hurricane Sandy has left some 132 people dead from the Caribbean to the US east coast.

The largest number of fatalities was, surprisingly, located in Haiti, which, while not directly hit by the storm, was hit by extreme flooding — tragic for a country still recovering from a massive earthquake in 2010. In terms of damage, the most damage has been caused to New York, which is being reported to have sustained $ 20 billion worth of destruction.

Even for the financial capital of the world, this is an astounding figure, one that will take residents — and the country — years to recover from. For more than two days, the east coast took a severe pounding from Mother Nature with almost all areas suffering power cuts and complete lockdowns. Residents have reported houses being torn from their foundations, transportation networks grinding to a halt and New York’s grand subway system being completely submerged in water. More than 12,000 flights have been grounded or cancelled. Basically, life as the citizens of the US have known it, has come to a screeching halt.

It is times such as these that a country needs to be united under solid leadership. US President Barack Obama is gaining leaps and bounds in the presidential race by setting his campaigning aside and concentrating on getting his people out of the crisis. For the past two days, President Obama has, literally, been doing his job by cutting red tape and ordering aid and assistance to all the affected areas. He has been at the forefront of making sure that his government reaches the many families lost and stranded by the storm, and that bare necessities make their way to each and every individual.

He is doing this at great risk to his own person as he is losing precious days of campaigning for the vote come November 6, but this might just get him the presidential seat once again. He is stepping out of his way to make sure disaster management and rehabilitation remain the US’s topmost priorities in the wake of Hurricane Sandy’s deadly landfall on the east coast.

While one hopes that precious human lives are saved and undue harm to life and property is prevented due to timely government intervention, we in Pakistan cannot help but feel saddened at how insignificant our lives are deemed when natural catastrophes and disasters hit home. We have had our fair share of such events with the most tragic and devastating being the floods that submerged one fifth of our entire country in 2010. As many as 1,600 people were killed and 20 million affected or displaced by the heaviest monsoon rains we have witnessed in decades.

Our president was criticised for choosing that moment to take a trip to France and our National Disaster Management Authority (NDMA) did a shoddy job of warning, updating and rehabilitating the hapless citizens. Even two whole years after the floods, with two more seasons of heavy flooding following, those displaced by the 2010 floods are still homeless and have not been given the compensation promised to them. The NDMA has proved itself to be an ineffective authority and our politicians have used natural disasters and their subsequent misery as chances for photo session to display come election time. Hurricane Sandy is a tragedy for all those it has hit but for us in Pakistan, the real tragedy is our ineffective, incompetent disaster management. – Dailytimes