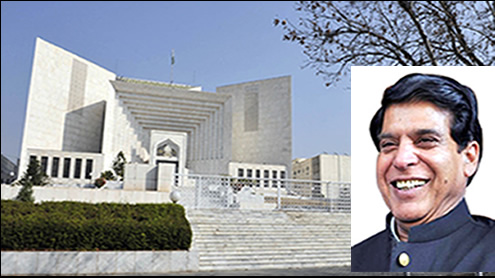 The air of confrontation between the government and the judiciary refuses to go away.

The Supreme Court’s (SC’s) notice to Prime Minister (PM) Raja Pervez Ashraf to appear on Augusta 27 to show cause why he should not be proceeded against for contempt of court like his predecessor Yousaf Raza Gilani has once again put the cat among the pigeons. The government’s response is yet to be clearly aknown, despite a statement in some sections of the press by Information Minister Qamar Zaman Kaira that a decision whether the PM should present himself before the court or not will only be taken after consultations. At the last hearing of the NRO implementation case on Wednesday, August 8, the hope that the court too now sought some ‘middle way’ to end the standoff between the executive and the judiciary, as expressed in Justice Asif Saeed Khosa’s advice to the Attorney General (AG) Irfan Qadir to play a mediatory role, dissipated amidst the court’s declaration that it cannot move an inch from its December 19, 2009 NRO judgement.

Two reasons for this reversal to a more rigid position have been enumerated by the court. One, a five-member bench hearing the NRO implementation case cannot revisit, let alone revise, the 17-member bench original NRO decision of 2009. Two, the court’s perception was that PM Raja Pervez Ashraf is resorting to delaying tactics in trying to avoid implementation of the court’s verdict on the letter to the Swiss authorities. The latter perception informs the court’s seemingly harsh act of issuing another contempt of court notice to another PM. Reports also state that Law Minister Farooq Naek’s August 7 television interview, in which he had said that the government was contemplating moving review petitions against the NRO judgement as well as the striking down of the Contempt Act, became a further basis for the court’s relatively harsh tone.

Those two review petitions have now been moved. Despite this setback to attempts to find a middle way to resolve the standoff, the court still found it convenient to ask the AG to continue his efforts for finding a compromise solution, failing which, the court would proceed further. The AG tried to argue that the court should exercise restraint, but the bench was having none of it, arguing that it has shown restraint but its hand had been forced by non-compliance with its verdicts.

What the honourable bench could have gone into is why this ‘non-compliance’ has emerged in the first place. The SC has neither taken account of presidential immunity under Article 248, nor, except in passing remarks about those seeking immunity having to apply to the court for it, attempted an interpretation of this Article. The government side has seemingly been reluctant to be drawn into an argument over Article 248, probably because it is its perception that it will not receive a sympathetic hearing from the SC, rather the reverse. The court’s insistence has begun to invite criticism of its approach, not the least from former Supreme Court Bar Association (SCBA) president Ms Asma Jahangir, whose words reflect the mounting anger against the judiciary in some legal circles.

She has squarely accused the judiciary of delivering political rather than judicial verdicts. Her statement is lent at least partial support by the present SCBA president Yasin Azad, who has suggested to the court that perhaps the best solution to the conundrum is for the court to set up a commission to write the by now infamous letter. He has also pointed to the political and economic instability being caused by the air of uncertainty this standoff is producing in and around the country. Perhaps the middle way is not only the best, but also the only way out of this impasse. -Dailytimes