Load shedding: from bad to worse 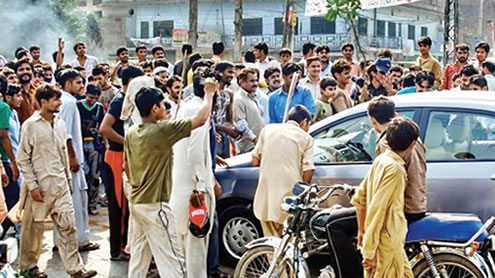 Load shedding from bad to worse

Load shedding riots have ravaged Pakistan from Karachi to Khyber. Pakistan Electric Power Company (PEPCO) offices are being ransacked, public and private properties damaged, skirmishes between police and the public are occurring, showing the fury of people determined to take the government to task for failing to provide uninterrupted power supply.

The riots have escalated because of Ramazan and the humid summer. People hoped to fulfil their religious obligations of fasting in a relatively comfortable manner as the government had promised there would be no power outages during Sehar and Iftar. Alas, the opposite has turned out to be the case. The new factor in the situation is the ruling PPP’s coalition allies turning hostile. The federal ministers from PML (Q) have rendered their resignations to their party leader Chaudhry Shujaat. The Awami National Party (ANP) not only staged a walkout from the Senate, it has called an All Parties Conference on August 9 to discuss the issue.

Minister for Railways Ghulam Ahmed Bilour has threatened to join the protesters if the situation is not handled in earnest, with the prospect of the ANP leaving the government if things fail to improve. The MQM too has added its voice to the protesting coalition allies. The government on the other hand, has accused the PML-N of arousing people against the government. Even if that is the case in Punjab, what about the load shedding riots in Khyber Pakhtunkhwa, Karachi and other areas of Pakistan? Surely the PML-N cannot be flattered with accusations of such wide influence?

The main reason for the power shortfall that has risen to fifty percent of demand is because the power generating units cannot buy the required fuel. This paucity of fuel is fuelled by a paucity of funds, which is owed to the infamous circular debt. WAPDA is facing losses of Rs 20 billion per month. It is owed Rs 400 billion in receivables from the private and public sectors. This money is not being retrieved because the defaulters enjoy political clout. Pilferage in the gas sector is 12 percent, the highest percentage in the world. Under such circumstances, can the government justify its efforts to restore electricity and overcome the energy crisis? The National Accountability Bureau has offered its services to the government to probe the financial wrongdoings in WAPDA.

It has even proposed providing the government a basic energy policy framework. If all else has failed, and the government is suffering from an ideas deficit, perhaps it should lend an ear to such well intentioned offers. The sense of urgency that should attend the government’s energy efforts is conspicuous by its absence. The Thar coal project that could give years of cheap electricity, albeit a long term prospect, is not being pursued in a manner that inspires confidence. Even if concessions are made for an inherited crisis, there is little excuse for seeming inaction, which has even failed to prevent the crisis from getting any worse.

This is an election year, and governments usually avoid serious mistakes at such a crucial time. What is disturbing even the government’s coalition allies is the prospect of returning to an angry electorate with nothing but load shedding in evidence. When the public is on the streets venting its anger at government installations, the grim mood may skew the election results against the incumbents. Although India has suffered a huge blackout the other day, this is hardly any consolation for the Pakistani public, suffering from government’s apparent neglect of what is shaping up as the mother of all issues in the coming elections.-Dailytimes