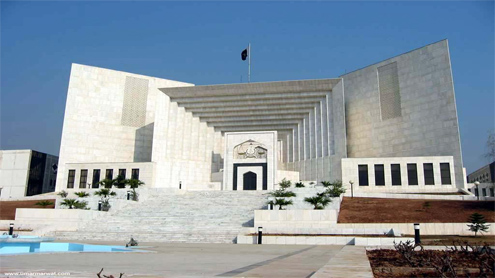 The Supreme Court of Pakistan

The Supreme Court (SC) has become the centre of the country’s life of late. Every day, proceedings in sensitive cases make headlines.

The honourable judges’ remarks in court are pounced upon to reinforce or contradict firmly held polarised opinions in the polity. The original jurisdiction of the SC, and its suo motu powers, are being used with such frequency that it has aroused concerns in the legal community at home and abroad. The net effect of all this judicial activism by the SC runs the risk, which may already be at hand, of making the SC controversial, a development neither in the interests of the judiciary nor the polity. For those alarmed by this turn of events, the proceedings in the NRO implementation case the other day may have provided some relief from the mounting tension.

A five-member bench headed by Justice Asif Saeed Khosa struck a remarkably different tone from what has become the norm in such cases. Despite some bitter exchanges between the Attorney General (AG) and the bench, the outcome must have given the country a chance to take a deep breath after weeks, if not months of an ostensible confrontation between the two apex institutions of state, the executive and the judiciary. The proceedings reiterated the views of the court regarding its previous orders, which it noted had yet to be carried out, that the government should write a letter to the Swiss authorities reversing the withdrawal of the alleged graft cases against President Asif Ali Zardari.

The AG countered with his by now well known arguments that the law had not been followed in the case, paragraph 178 of the NRO judgement was unimplementable because the president enjoyed immunity while in office, and that one prime minister had already been sent home unconstitutionally for not implementing the court’s orders. He also pointed to ostensible contradictions between the July 12 and the earlier 17-member bench verdicts in the NRO case. At the end of these exchanges, the atmospherics seemed to undergo a welcome change, with Justice Khosa offering reassuring words regarding the court wanting to dispel the impression that it wanted to derail the system or send another prime minister home. He went so far as to offer that the court could write in its final judgement that the president enjoyed immunity.

Justice Khosa attempted to apply balm on the country’s smarting wounds by saying the nation should not be “terrified” of any adverse developments. The court was cognizant of the nosediving of the economy and political instability because of developments in such cases. The court then suggested that the AG play a mediatory role between the two institutions in finding a solution that upheld the position of both sides in the argument. The case was then adjourned for two weeks to allow the AG, now centre-stage despite his often acrimonious exchanges with the SC, to search for a satisfactory solution to the conundrum.

Those of a conspiratorial bent are still inclined to see this ‘softening’ of the SC’s stance as a tactical move since the contempt of court case revealed on the same day familiar court harping on about the president and other top officials listed in the new Contempt Act as not enjoying immunity except against criminal prosecution while in office and for acts of an official nature rather than private. These ‘mixed’ signals have persuaded some to see the court waiting for the contempt legislation to be either struck down in toto or partially to reverse what is being referred to as the ‘defanging’ of the court.

Such speculations do neither the speculators nor the superior judiciary justice. No civilised society can progress without faith in the institutions of state and the honourable persons occupying such important office. The country places great faith in the restored judiciary’s adherence to the constitution and law, best interests of the country, and respect for other institutions and high offices of state. Let the wisdom of the court find a way out of the impasse that nudges the country in the right direction, and not exercise the impudence to ascribe ulterior motives to the superior judiciary. -Dailytimes

Cuban President Raul Castro ‘willing to talk to US’