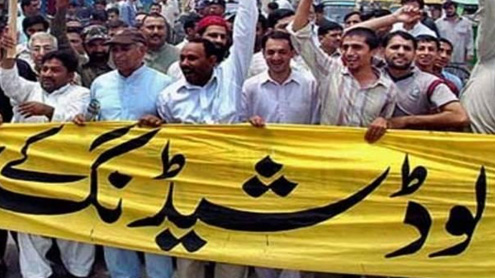 Chaudhry Ahmed Mukhtar promised that there would be zero loadshedding in the month of Ramazan. We are only four days into Ramazan and the country is facing its worst power outages.

The shortfall has increased to 5,500 Megawatts. Two nuclear power generating units Chashma 1 and Chashma II are closed for maintenance while the government is short of money to pay to the power generation companies so that they could buy furnace oil to run their units. People are already on the streets to protest and violence is in the air if power is not restored as promised by the government, especially at Iftar and Sehar times. There is not much new about the situation, it has been so for years, and once again to restore temporary equanimity in the public, the government would make some hasty payments to the oil companies, which would be followed by a period of less load shedding, only to recur later.

Circular debt is the evil eating into the energy sector, and thereby into the social and economic well being of Pakistan. Time and again the government has come up with different options to prevent this monster from going out of control, and every time it has failed miserably. At Rs 398 billion and growing, circular debt has crushed the country under its weight. The power distribution companies’ inability to recover their outstanding bills from 47 percent of their customers is one of the major causes of the ballooning circular debt. The bill evaders comprise government departments and the ruling elite and remain out of the ambit of the law. No action is taken against the defaulters.

How long does the government think it can continue to play ducks and drakes with this issue? How long does it think it can continue to feed people with hollow promises without delivering? Prime Minister Raja Pervez Ashraf, when minister for water and power, promised to end load shedding in a matter of months, but had to eat his words. Now the new minister Chaudhry Ahmed Mukhtar is doing the same. When Chaudhry Mukhtar became the Minister for Water and Power he asked for the removal of the PEPCO chief. His demand was granted. Even then Chaudhry failed to make even a dent in the crisis. The reason being that he too like his predecessor is playing on the wrong side of the issue. The issue in hand is of fiscal mismanagement. We all know and so does the Minister of Water and Power that the supply chain of the energy sector has slippages of extraordinary proportion. There are defaulters who do not want to pay.

There are line losses including power theft because the distribution companies are not adept at addressing the issue head on by bringing line losses to international standards and acting against power thieves. There is a government at the helm that has failed to implement any of its own various proposals to get rid of power outages. In short, there are layers and layers of mismanagement overshadowing the energy sector. One hopes Chaudhry Mukhtar would not let the energy sector meet the same fate as PIA did under his command as the Minister of Defence. A prudent energy policy with the will to implement the same is all that is required to overcome the chronic mismanagement in the energy sector. The government must understand that it is playing with fire and underestimating the anger in the suffering public, an anger that could turn against it in the upcoming general election.-Dailytimes