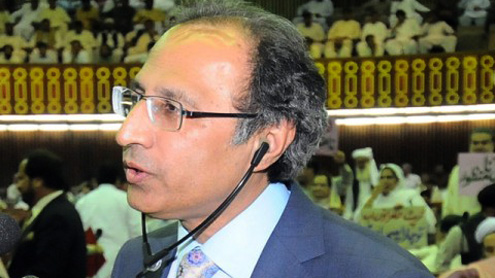 This phenomenon is a matter of routine for elected governments in other countries but unique in Pakistan because of a variety of reasons. The country, since its independence, has had a colourful yet turbulent political history characterised at times by martial laws and short-lived civilian – both democratic and quasi-democratic – governments. Prime Minister Gilani can rightly be proud of this achievement. This feat was made possible by the dexterous handling of the coalition partners by President Asif Ali Zardari who employed all resources at his command to keep them together and also by the realisation within all stakeholders, particularly PML(N) chief Nawaz Sharif, not to tilt the apple cart and thus keep constitutional deviation at bay.

The present government assumed office following February 2008 general election in the aftermath of the tragic assassination of PPP chairperson Benazir Bhutto and the charged atmosphere as a result of the constitutional deviation by General Musharraf. The economy was in distress because of the Musharraf /Shaukat Aziz government’s predisposition to delay/avoid unpalatable economic measures in 2007 so as not to hurt the prospects of its political ally, the PML(Q), in the 2008 election. The principle of prudent financial management in the energy sector which had strictly been adhered to was consigned to the dustbin, resulting in accumulation of circular debt besides its neglect to add power generation capacity to meet the rising energy demand.

The present government exacerbated the country’s economic woes by its profligacy and reinstating employees in public sector enterprises (PSEs) en masse with back benefits, doling out managerial and executive positions in government-run enterprises on cronyism and political patronage instead of merit. The size of the federal cabinet is huge to say the least. After the Eighteenth Amendment with elimination of the ‘Concurrent List’ and devolution of the provincial subjects to provinces, it was expected that the size of the federal government and the federal cabinet would shrink but to the contrary it expanded. Instead of appointing cabinet ministers of various divisions, new divisions have been created to allot portfolios to ministers. On the other hand, tax mobilisation efforts were relaxed to avoid annoying high nuisance-value sections of society

To shore up the dwindling foreign exchange reserves the government in 2008 sought assistance from the International Monetary Fund (IMF) and agreed to undertake specific measures to introduce fiscal discipline, rationalise government spending, etc, with a view to stabilising economy. However, in the third year of the programme, it balked at furthering these reforms as per agreed milestones and after initially soliciting waivers from the Fund, it finally abandoned the IMF Stand-By Arrangement (SBA) of macroeconomic reforms. To make matters worse, relations with the United States touched their lowest ebb after a series of incidents: the Raymond Davis shootout in Lahore, followed by the Nato raid to nab Osama bin Laden in Abbottabad and finally the killing of 24 innocent Pakistani soldiers in Salala in a US raid. Almost all US assistance and reimbursement of Pakistan’s expenses in its contribution to the war against terror from the Coalition Support Fund (CSF) remain suspended because of a serious deterioration in bilateral relations.

The current fiscal year that is about to end in less than a month has presented numerous challenges on the economic front that included the aftermath of the floods in the previous year and damage wreaked by heavy rainfall during the current fiscal year. The fact that the government managed to muddle through it without default is no mean feat. The primary reason behind the rise in inflation is government borrowing from the banking system. This departure from fiscal prudence is so great that SBP is not only printing notes and lending directly but also has injected liquidity in excess of Rs 250 billion into the banks to overcome chronic cash flow shortages in the banking system. It also resulted in crowding out private credit, hurting country’s economic prospects and contributing to joblessness. The domestic debt has doubled to 7.4 trillion rupees from rupees 2.8 trillion in 2009. This will double again in three years if borrowing proceeds at the current pace. The servicing of this debt takes up 75 percent of the federal revenue after provincial transfers. This is the worrisome part as it effectively erodes the capacity to achieve primary budget balance, ie, expenditure must match revenue before interest on debt.

It is increasingly clear that the government cannot continue much longer in this fashion. The hour of reckoning is round the corner and without going to the Fund for assistance the Pakistani rupee would nosedive and inflation that has been in double digits throughout the tenure of the present government would again attain dangerous heights (it was as high as 25 percent in August 2008). Peoples’ patience with the rising cost of living and power outages is wearing thin. Their anger has so far manifested itself in street protests, often violent, in major towns of the country. Going to the IMF for assistance would certainly entail tough conditions, some of them to be implemented upfront, to stabilise the economy and improve macroeconomic fundamentals. Most of these measures would be painful, requiring belt tightening and, in an election year, it is difficult to visualise that the government would stay the course even if it initially agrees to undertake such measures.

It is in this backdrop and the fact that a large part of the developed world to which our exports are consigned is in recession, that the federal budget presented by the government needs to be studied and analysed. There is a slight mismatch in some of the figures as announced by the finance minister on the floor of the house and the budget documents. For instance the total outlay of the budget was stated to be rupees 2960 billion but the Finance Bill 2012 states this figure as Rs 3203 billion. There is variance in the spoken and the written words in other areas also. As has become the norm the budget estimates on the expenditure are conservative (read understated) and optimistic on receipts (overstated). Being an election year, an across-the-board ad hoc increase in salaries and pensions has been granted to government servants and armed forces personnel. This is likely to lead to higher inflation and will also cause disarray in the formulation of provincial budgets as has been the case on previous occasions. The private sector will also be hit hard by similar expectations of pay increase, which will certainly contribute towards a significant reduction in job opportunities.

Severe budgetary constraints notwithstanding, a hefty amount of Rs 591 billion has been allocated for development, of which Rs 360 billion will be for Public Sector Development Programme (PSDP). Since cotton prices soared last year the government had not paid much attention to the textile sector. Now that cotton prices in the international market have dropped significantly, the government needs to move quickly to facilitate the textile sector, which is our main export earner. Realising this need, a significant allocation has been made for this sector. Whether this funding will be used to clear the past dues or it will be forward looking remains to be seen. The pharmaceutical sector has performed well during the current year. A five percent reduction in tariff on 95 items of raw material category would help it improve its performance. Rs 209 billion has been shown as allocation for subsidies, of which Rs 135 billion will be utilised for subsidy on power alone. This is less than fifty percent of the outstanding circular debt relating to the power sector. The assertion by the finance minister on the floor of the house that he has been directed by the cabinet to provide whatever funds are needed for the power sector – are we to assume that payments to liquidate the outstanding circular debt will be made from outside the budget? The shortage of natural gas is likely to continue, if not exacerbate further in the short-term, and subsidy on urea would remain a necessity.

An attempt has been made to remove some aberrations in the sales tax and federal excise duty (FED) by reducing the number of goods liable to FED through amendments in the first and third schedules of the Excise Act and rescinding SROs 644 and 594 pertaining to Sales Tax. Since the Prime Minister had pledged that there shall be no new taxes therefore revenue measures are in the nature of adjustments in existing levies. However, adjustments made in income tax would yield significantly higher revenue in some instances and provide similar relief to others. The revenue impact of these measures is estimated to yield rupees 31.8 billion to the exchequer.

The budget is more than mere accounting as it reflects a government’s priorities that in the instant case is the forthcoming general election. Tensions created by the election year pressures for all political parties manifested themselves in an ugly shape when the opposition legislators sought to hijack the unveiling of the budget, trading punches during angry scuffles. The PML(N) wanted to register its protest against power cuts, rising inflation and corruption but it seemed to have overplayed its hand by going beyond traditional means of heckling during the budget speech and then staging a walkout. Dr Sheikh, however, retained his composure in a visibly hostile environment. Last but not least: it is highly unfortunate that the budget presentation coincided with an unsavoury development; the rupee sank to its lowest level in the open market to 93.8350 to a US dollar amid reports that the fiscal deficit would touch 7 percent of GDP during the year.

The government is reluctant to tax sectors within the economy that not only have the capacity but should in fact be paying more than they do at present; for instance, wholesale, retail and real estate sectors. Banks that reap windfall profits on their risk free lending to the government and its allied institutions against sovereign guarantee, have not been made to share this bounty with the exchequer except for phased closure of the tax arbitrage window in respect of their investment in government securities that they routed through money market funds of their wholly owned asset management companies. The government is indeed handicapped by lack of enforcement in the Federal Board of Revenue (FBR) as the technology loop remains incomplete preventing full exploitation of data collected by FBR. The mountain of data in the databank is neither interconnected nor properly massaged. There is a glaring disconnect between Customs and Inland Revenue though Customs collects sales tax for Inland Revenue. Similarly, there is pronounced lack of harmonisation in federal and provincial taxes. While the lengthy adjudication process remains a bottleneck in recovery of outstanding tax demand, news of harassment of taxpayers by FBR officials abounds. Although, the threshold for withholding tax on cash withdrawals for bank accounts has been doubled from 25,000 to 50,000 rupees, it is not likely to reduce the quantum of currency in circulation that at present stands at 34 percent of money supply as against 20 percent before the imposition of withholding tax on cash withdrawals.

Let there be no mistake that this is an election year budget and not only no new taxes have been levied but tax amnesty schemes have been announced, consigning the avowed determination to document the economy and widen the tax net to oblivion. This, however, has ominous portents for the economy. And finally, there is absolutely no sanctity of budget estimates or receipt and expenditure figures as these are subjected to revisions and re-revisions throughout the fiscal year. The reason for these changes is evidently the proclivity of successive governments to be economical with the truth and as a rule underestimate spending and buttress receipts. – Brecorder

New departments to be set up in Customs: Hafeez

New departments to be set up in Customs: Hafeez