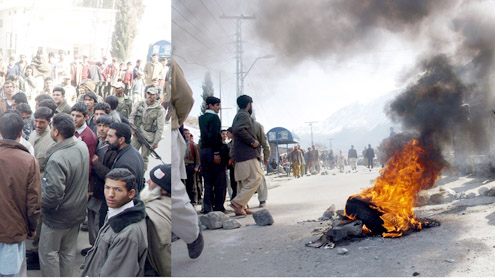 Round and round as we go once more on this joyride from hell we call Pakistan’s electricity affairs with the election topmost on everybody’s priority list, pockets will be opened and projects completed at whatever cost has to be borne by Pakistani taxpayers post-elections.

In just such a display of regressive generosity, Prime Minister (PM) Yousaf Raza Gilani has ordered the Ministry of Finance to urgently release Rs 1.5 billion to WAPDA to partially settle the claims of the Independent Power Producers (IPPs). He also directed that a committee consisting of the Deputy Chairman of the Planning Commission and the secretaries of Finance, the Economic Affairs Division and Water and Power should be set up to facilitate the simplification of procedures aimed at attracting private sector investment in the energy sector. How these steps taken by the PM would address the actual gigantic crisis is yet to make sense. Their superficiality is too obvious. On the one hand, the already installed 28 IPPs are producing far less than their actual capacity only due to the fact that they are not being paid their outstanding debt to be able to buy sufficient fuel to power their plants. How on earth then is the proposed committee going to attract private sector investment? The financial injection of Rs 1.5 billion is too small an amount to do any wonders except serving as a (very) short-term measure. Over the years, the accumulated circular debt has gone up to Rs 400 billion (or more). This government, since it came to power in 2008, has only made short-term policies to overcome this serious issue. Tall claims and false promises are made with the masses, which expose their hollowness every time.

A few weeks ago, the government had announced that it would release Rs 70 billion immediately to the power companies and another Rs 82 billion through Term Finance Certificates (TFC) of the Oil and Gas Development Company Limited (OGDCL) to resolve the worsening power situation. However, the country is yet to see implementation of that announcement. Now who will guarantee that as per the latest announcement of the PM, Rs 1.5 million would actually be released and we will get ‘some’ respite from the acute load shedding during these hottest days of the year? The question of the funds’ availability too remains unanswered. If the government plans on printing more currency to meet this challenge, it is going to go nowhere. The already fast sliding economy of the country will be disturbed even further, showing even worse inflationary consequences.

This problem requires not just short- but also long-term solutions. The country’s power demand can only be met if the power producers, both public and private, run at their actual generation capacity, which is 14,500 MW. Due to non-payment of their bills, their production has decreased to only 7,800 MW and a deficit of 6,700 MW, which often goes up to 8,500 MW, has been massively adding to the downward spiral in the country’s economy. Mass level agitation and protests are being reported across the country as more people lose their jobs due to the closure of industrial units and factories. In Faisalabad alone, the closure of the power looms sector has left half a million families unemployed. Yesterday, the Faisalabad Electricity Supply Company Limited’s chief was sacked. Would this measure reduce the load shedding duration in any way? The latest decision compels one to ask why does our government always wake up so late to settle almost every issue and that too with a short-term solution? Such ad hoc, partial and day-to-day tricks would not serve. The government has to come up with real solutions if it claims to have the best brains in its cabinet. However, the sense to solve the circular debt issue with the banks’ help seems to take longer to prevail on the government’s not-so-smart troubleshooters.

SECOND EDITORIAL: Student suicides Three students committed suicide last week, raising alarm at an emerging trend that remains unaddressed. Most of the reported suicide cases involve school- and college-going students belonging to low-income families. It is time society took stock of what is causing children to take this extreme step. While there could be several reasons for this unfortunate tendency, some are: the standard of education offered to children from the lower-income bracket, the quality of the curriculum and text books, the abusive attitude of some teachers, the unrealistic expectations of parents, the pressure to get a good education as the key to employment and better living standards, and an absence of student counselling. It is a vicious cycle. The poorly educated, abused students of yesterday are today’s teachers in state-run cash-strapped schools and colleges. Lack of good education and teaching training programmes produce individuals who are disinterested, unmotivated and unsuitable to be in classrooms stuffed to capacity with children from backgrounds similar to their own. Burdened by social and economic pressures, these teachers conduct their duties with an unwillingness to go beyond the rote-and-reproduce archaic system and a cane in their hands. Children are taught to not think, only to sport a show of being educated, while learning nothing significant. Verbal and physical abuse become part of a normal school day; as a result, a psyche of fear becomes ingrained in the young personality. In institutions where even the required number of teachers is absent, to hope for student guidance may be asking for the moon, but it is of the utmost importance when young people start to kill themselves over very insignificant issues. It is time the education ministries devise and incorporate policies that would not only improve the standard of education but also help students discuss their academic/psychological issues with someone within the institution assigned this task.

Parents play an even bigger role. To pressurise children to do well beyond a point can prove harmful for a child’s emotional and mental growth. Other pressures in the home stem from the fight for economic survival. A bad report card, the ridicule of peers, censure of parents and humiliation at school all inculcate a deep sense of fear of failure, which in some cases, ends in the ultimate escape: death. Parents, educationists and psychologists need to come together to learn how to minimize, if not eliminate, such pressures debilitating young people’s educational and mental capabilities. There should be forums where all three engage in a healthy discourse with children, helping them develop a balance between expectations and reality. Until there is an interactive dialogue between the concerned parties, children feeling isolated will keep dying prematurely and unnecessarily. – dailytimes