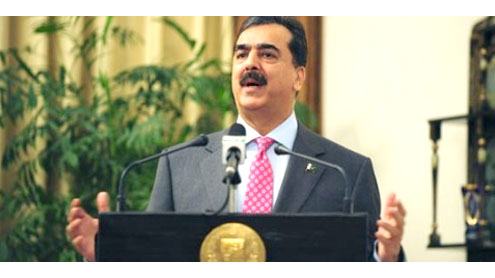 Prime Minister (PM) Yousaf Raza Gilani has assumed a far more confident demeanour after the PPP’s success in the by-elections and then the Senate polls.

That perhaps explains his categorical statement the other day that he and the government were here to stay and not going anywhere. It was a direct rejoinder to all the sceptics and critics that had been repeatedly predicting the demise of the government for one reason or another. Some of this tribe had pinned their hopes on the NRO case, the memo fiasco and the contempt of court being faced by the PM. None of this came to pass however, and in the aftermath of its electoral showing, the PPP and the PM’s mood appears to have changed to open confidence and even defiance against all comers.

This newfound confidence and bravado may also explain the PM’s categorical enunciation of the PPP’s support to the creation of a Saraiki province to be carved out of southern Punjab. Addressing a meeting of flood affectees in Muzzafargarh the other day, the PM expressed his wholehearted support for the aim of a Saraiki province. Even if the occasion and location may be part of the explanation why the PM felt the urge to explicate the issue, the fact that in the process he rejected PML-N chief Nawaz Sharif’s suggestion that a province in southern Punjab should be delineated on administrative rather than linguistic or cultural lines, indicates a deeper purpose.

The country is increasingly gripped by election anticipation if not fever. Certainly all the heavyweight leaders are busy at the stumpings. In the context of this development, the PM’s raising of the Saraiki province issue could also be traced to a build up for the coming elections. The PM’s natural sympathies with the area he comes from should come as no surprise. He characterised the Saraiki-speaking people as “sober, kind-hearted and speak(ing) a sweet language”, but went on to assert that this did not mean “they do not know what they want”.

The critique of the PML-N’s approach to the aspirations of the people of southern Punjab rests squarely on the sense of neglect and deprivation that is generally prevalent in the area, as well as an assertion of linguistic and cultural rights against ‘Takht Lahore’ (rule by central Punjab from the provincial capital Lahore). Nawaz Sharif’s support to the idea of a new province in southern Punjab, albeit on administrative lines alone, was in response to the voice being raised by the people of the area for recognition of their struggle for political, economic and cultural rights. But administrative convenience alone (i.e. bringing government closer to the doorstep of southern Punjab) does not seem to satisfy the aspirations of the region.

The issue of new provinces found resonance also in the speech Baba Haider Zaman, leader of the Tehrik Hazara Sooba, made in Karachi on the same day, with his rally apparently organised with MQM’s help. MQM has introduced a bill in the National Assembly for the creation of a Hazara province to be carved out of Khyber Pakhtunkhwa. Just as southern Punjab argues that Saraiki is a language separate from Punjabi, the Hazara people assert that their language, Hindko, is separate from Pushto, and that they deserve recognition in the form of a separate province.

Here the PPP is caught on the horns of a dilemma. It has not categorically stated that it supports a Hazara province since this would be likely to annoy its coalition partner, the ANP. These glaringly different approaches to the two demands reflects the fact that the question of new provinces is being approached by most political players less on the basis of principle and more for point scoring against their opponents. This has reduced the debate to a political football, without the serious contemplation it deserves.

After One Unit was dissolved in 1970, the restored provinces (and newly created province of Balochistan) were reasonably content. But times and circumstance change, and 42 years later, the unthinkable has entered the mainstream political discourse, even if it is in a politically expedient rather than principled manner. The undivided subcontinent included the greatest mosaic of languages, cultures and national groups found in any part of the world.
That is why, in the subcontinent’s history, the periods of a united subcontinent are far fewer and punctuated by long periods of centrifugal tendencies and smaller principalities. The modern history of the subcontinent has followed the same pattern, with the independence movement yielding two states and in 1971, three. Within India, provinces (states as they are called there) were recast and continue to be recast on linguistic and cultural lines. Pakistan’s case being one of a less secure, interrupted march to democracy, the demand for new provinces has taken a long time to germinate and find full expression.

This kind of sub-nationalism is by now well known in many parts of the world. What binds all these movements is a sense of loss of identity, discrimination in the political, economic and cultural sphere, and the aspiration to recover all these through control of its own territory, administratively as well as politically.

Naturally, such nationalism is usually first articulated by the local elite and intelligentsia, but as soon as it captures the imagination of the masses, takes on the character of an irresistible force. However, the issue cannot be resolved without ascertaining (through referenda for example) the will of the people of the region in question and the province to which they belong. Given the present conjuncture, this is unlikely to see the light of day seriously until after the coming elections. – Dailytimes

Top US general coming to Pakistan

Top US general coming to Pakistan