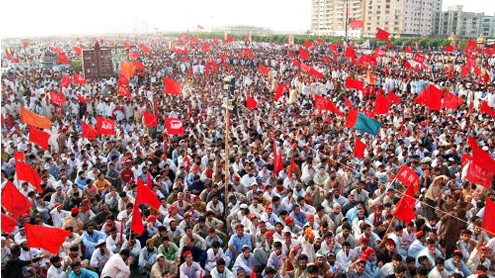 Just when the entire country had breathed a collective sigh of relief because of a lull in terror attacks day in and day out, the terrorists have stepped up their operations once more. The blast that shook Nowshera the other day caused at least six deaths while leaving 20 injured at the public rally of the Awami National Party (ANP). The remote control bomb containing three to four kilograms of explosives planted on a motorcycle was parked near the exit gate of the event. It detonated moments after the leaders of the ANP, including the Chief Minister of Khyber Pakhtunkhwa (KP) Ameer Haider Hoti left the venue. Last week also, the restive province had witnessed two fatal terrorist attacks in Peshawar that collectively took 17 lives, including the deaths of four policemen in suicide bombings at a police station on Friday and 13 on Thursday when a bomb fitted in a car exploded at a bus stand. The KP Information Minister Mian Iftikhar has blamed the US drone attacks in the tribal belt of FATA for these ‘retaliatory’ attacks from the Taliban. That may well be the reason for the recent spate of terrorist attacks in KP and FATA. However, a closer look at the recent attacks reflects another pattern. They look more like the work of militants reacting against the military operations being carried out in Orakzai, Kurram and other Agencies than retaliation for the US drone strikes. We are in the middle of an asymmetrical war against the Taliban who, whenever they are pressed in their base areas of concentration by military operations, resort to this tactic and start attacking places where security arrangements look less stringent and easier to sabotage.

Monday’s attack on the ANP’s public meeting was an obvious target of the terrorists. The ANP is leading the government of the province, and is fighting against terrorism. The likelihood of an attack on its event was relatively high, calling for extraordinary security arrangements to be ensured by the security outfits. However, a lack of it allowed the terrorists to attack it, which caused so much loss of life. The attack reflects the laxity on the part of the security forces, which blatantly failed to avert the attack that could have been anticipated. Our security forces have to answer the terrorists with full might so to send a strong message of determination to them while understanding their tactics, which they use against us being engaged in asymmetrical warfare. A temporary lull in terrorist activities ought not to be taken lightly as the war is still continuing and we have yet to reach its logical conclusion.

The situation calls for staying alert 24/7 as we are up against a very determined foe, which never ignores any leeway in the security arrangements and hits its target hard whenever it gets an opportunity. An intelligent teamwork between our security forces and intelligence outfits is required to fight meaningfully and conclusively against the hardcore enemy. Only clearance of an area from the terrorists is not enough. Constant vigilance is the need of the hour if we want to prevent terrorist attacks from taking place while fighting for extermination of the menace of terrorism from our soil. – Dailytimes