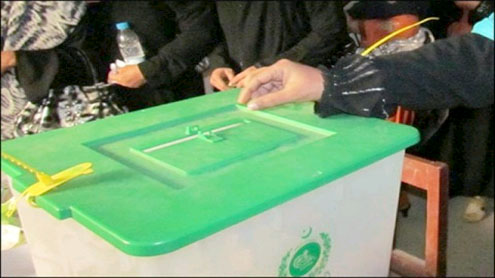 By-elections were held on six National and four provincial seats. At the time of writing these lines, the Pakistan People’s Party (PPP) was leading on four seats while the Pakistan Muslim League-Nawaz (PML-N) on three.

The other three seats were won by the Awami National Party (ANP), the Pakistan Muslim League-Functional (PML-F) and an independent candidate each. While the results of the by-elections were not surprising, the behaviour of some of the candidates and/or their supporters was something that left a bad taste in the mouth.

PPP candidate Waheeda Shah beat up the female polling staff in her constituency, alleging that they were rigging the elections. The police remained a silent spectator. She later admitted that it was a mistake on her part that she hit the staff. In other constituencies, there were reports of firing and squabbles between the supporters of rival candidates.

What this shows is a lack of democratic spirit in our politicians as well as their supporters.Granted that ours is a nascent democracy and the democratic culture has been subverted due to regular military interventions, but that does not give the politicians and their supporters the right to indulge in hooliganism. In developed democracies, if a candidate loses, he/she accepts it in a mature and dignified manner. If there are reports of foul play and rigging, it is reported to the concerned authorities so that the law can take its course rather than people taking the law into their own hands.

The way some electoral candidates and their supporters act in our part of the world leaves a great deal to be desired. Beating up the polling staff or using weapons to intimidate one’s rivals is certainly not the way to go about things in a proper democracy. Our politicians must learn the art of politics and adopt the spirit of democracy. The police is under pressure from the powerful political circles not to take action in these matters but if we want to improve the rule of law, we must give independence to our police force so that they can act in an unbiased manner without fear of a political backlash.

Nobody can be allowed to treat this country as their personal fiefdom, be it politicians, bureaucrats, the military, the security forces or anyone else. Laws are not made to be trampled upon by the high and mighty. But that is exactly what happens in Pakistan. It has been observed that many Pakistanis who live abroad and follow the rules and regulations of the respective countries they reside in feel no shame in breaking the laws when they come back to this ‘land of the pure’.

The fear of being penalised for breaking a law outside Pakistan compels them to act as law-abiding citizens abroad. That they can get away with anything and everything here makes them lose their respect for Pakistani laws. When potential law-makers, i.e. members of parliament/provincial assemblies, act as if there is only law of the jungle prevalent in the country, it is hard to stop others from emulating them. Such attitudes must be discouraged and the only way to do this would be to implement the existing laws without fear or favour. Pakistanis must start to respect the law of the land if they want our country to progress as a democracy. – Dailytimes