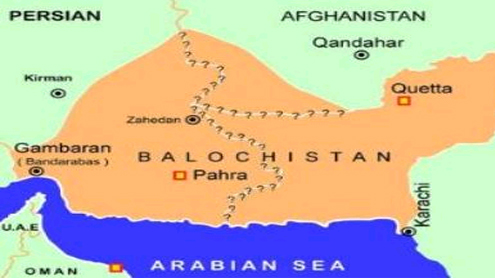 The furore in Pakistan over the hearing and resolution in the US Congress regarding Balochistan refuses to die down. Politicians and the media have expended much breath and space on the issue, but by and large, they have indulged in misplaced concreteness.

While every kind of condemnation of the US for interfering in Pakistan’s internal affairs is to be had at the drop of a hat, very few have taken a deep breath to assess soberly, calmly and wisely why things have come to such a pass. The Balochistan problem is as old as Pakistan. It has not been handled wisely, force and deception being employed more often than not against Baloch nationalists demanding their due rights. A continuation of this policy in the current fifth war in Balochistan since independence has stoked separatist sentiment to the point where the nationalists in exile are openly demanding an independent Balochistan.

One such view can be had from an interview of Brahamdagh Bugti in exile. He has reiterated his view that the policy of ‘kill and dump’, whereby mutilated tortured bodies of Baloch nationalists keep turning up every other day all over Balochistan, justifies the demand for separation from Pakistan. He has welcomed the US Congressional hearing and resolution, thereby rejecting the argument of the issue being an internal matter of Pakistan on the grounds that in today’s world, atrocities on the people by state forces call for international intervention. In the same breath he has dismissed out of hand the Pakistan government’s declared intent to convene an All Parties Conference (APC) on Balochistan. He has advised the Governor and Chief Minister of Balochistan to quit their office and join the resistance or else go home and keep quiet. Despite setting up a committee to contact and persuade all stakeholders to participate in the APC, Prime Minister Gilani seems to be swimming against the tide. The Baloch nationalists, even the moderates still subscribing to the federation, have rejected the APC as having been overtaken by events and therefore without merit. To add ammunition to this stance, PML-N leader Nawaz Sharif has set forth two non-negotiable conditions for attending the APC: the arrest of Akbar Bugti’s killers, and the recovery of missing persons. Some observers regard these conditions as not achievable, leading to the conclusion that Nawaz Sharif and his party, despite being the original authors of the idea of an APC on Balochistan, have backed away from the proposal as unlikely to be of any use. The fact is that without the participation of the Baloch nationalists, especially those in exile or in the mountains, and given the military’s seemingly unbending determination to continue with its present repressive course, an APC would be Hamlet without the Prince of Denmark, an exercise in futility, and end up no better than the Aghaaz-e-Haqooq-e-Balochistan Package announced by the PPP government with such fanfare, and which the PM himself has conceded has been overshadowed by the ground situation in the province.

The US administration has been at pains to distance itself from the Congress events on Balochistan. This is understandable when Pakistan-US relations are almost frozen and efforts to warm up ties are still subject to delay because of Pakistan’s parliamentary review of the relationship and terms of engagement. The Congress happenings have been, to put it mildly, unhelpful in this regard. That said, it should not be ignored that Balochistan potentially offers much temptation to the great powers. Its long Mekran coastline a stone’s throw from the Straits of Hormuz, its gas, oil and minerals potential, and its location as a possible listening post for Iran could tempt Washington to at least keep the option of support for the Baloch nationalists as a card to be played at an appropriate time. Clearly, US strategic and economic interests would dictate any such eventuality, not necessarily any deeply felt sympathy for the plight of the Baloch. The fact that Brahamdagh Bugti on the one hand denies any foreign support for his movement and at the same time welcomes any such help in future may be a reflection of his bitterness and anger, but perhaps the Baloch protagonists of independence for the province could do worse than cast a sceptical eye on Washington’s aims. Beware of Greeks bearing gifts. *

The cat finally came out of the bag on Wednesday but as expected the adventure failed to provide any substantial evidence and credence to the claims in the Memogate case. The central figure in the affair, Mansoor Ijaz, testified before the judicial commission by video link arranged at the Pakistan High Commission in London in the presence of the commission’s secretary. While submitting his 29-page testimony along with a load of evidence, including his BlackBerry, PIN, phone numbers, emails, code words, documents and other key information, which are yet to undergo forensic examination, Ijaz admitted that he had written the first draft of the memo himself without the consent of Pakistan’s former ambassador to the US, Husain Haqqani, as he could not get hold of him. The commission has allowed Haqqani’s counsel to travel to London and cross-examine Mansoor Ijaz and conduct forensic examination of the evidence provided by him.

The proceedings in the memo case are one after another peeling the layers of drama off Mansoor Ijaz’s skin — a dubious and megalomaniacal character. Since the scandal broke out, it created immense misunderstandings among different institutions of Pakistan’s state and Mansoor Ijaz kept fanning the fire by his statements, which he has failed to support in his testimony. He testified to the commission: “It was my understanding that Haqqani had directives from the Pakistani President.” Mansoor Ijaz should know that Pakistan’s affairs are not run according to his understanding. He is not a Pakistani and has little idea of this country’s history and politics as he himself has admitted his inability to understand the 1971 analogy allegedly drawn by Husain Haqqani when he asked Mansoor Ijaz to deliver the memo to Admiral Mike Mullen. BlackBerry manufacturer Research in Motion (RIM) has refused to provide BlackBerry data exchanged between Mansoor Ijaz and Husain Haqqani because of confidentiality restrictions and because data is not stored for more than three months.

The Memogate scandal has continuously been proving a complete waste of the country’s precious time and resources. It has damaged the inherent image/idea of our country’s sovereignty. Interestingly, taking notice of airing footage of the proceedings, the commission has warned the media of strict action. The court directives would have certainly disappointed media-savvy Mansoor Ijaz who has crossed all limits to get media attention. * – Dailytimes