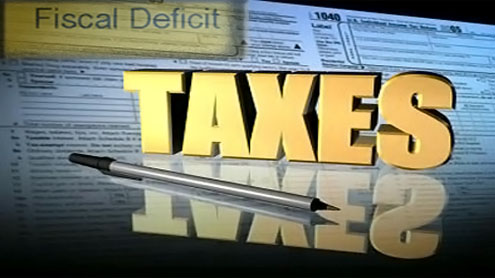 A very disturbing, rather unbelievable, news appeared in this newspaper on 20th February, 2012.

Reliable sources are reported to have revealed that the country’s economic team during a briefing to the Prime Minister on the economic situation has expressed helplessness to bring agriculture, real estate and stock exchange transactions into the tax net and, consequently, fiscal deficit would continue to pose a major challenge because of some influential sectors remaining out of the tax net.

Further, the economic team had very little or no hope that these sectors would be brought into the tax net due to difficulties in achieving a political consensus.The challenges on the fiscal side could also be exacerbated by risks in the realisation of receipts from the Coalition Support Fund (CSF), sale of 3G licences, and from Etisalat for privatisation of PTCL.The FBR target of Rs 1,952 billion for FY12, 25 percent higher than the actual collection of Rs 1,558 billion last year, was also being viewed as unachievable while there was a possibility of slippages on budgetary allocation for subsidies on electricity and budget surplus from the provinces.

On the expenditure side, almost all the revenue available to the Federal Government (after transfer of revenues to the provinces) was spent on interest payments and defence.As such, the government had to borrow to pay salaries to the federal government civil employees, operate ministries, pay subsidies on electricity, income support programme, flood relief measures, provincial grants other than the NFC and PSDP.It was also brought to the notice of the Prime Minister that fiscal imprudence quickly translates into decrease in foreign exchange reserves and forces the country to seek a bailout package from the IMF.

Factors leading to price pressures in the coming period could include increased domestic government borrowings, raise in wheat procurement price from Rs 950 to Rs 1050 per maund, an upward adjustment in petroleum prices as a consequence of increase in the international market and reduced gas pressure forcing consumers to switch to more expensive fuel: petrol.

It would have been very interesting to know the response of the Prime Minister but, sadly, it is missing from the news item which gives the impression that the meeting was a monologue instead of a dialogue.However, the submission of the economic team raises a number of very important questions in relation to overall economic policy formulation.

If the economic managers of the country find themselves helpless before vested interests and influential lobbies and the political leadership of the country does not listen to their advice and back them up properly, who is then going to tell the truth to the nation, confront tax evaders and bell the cat for fiscal consolidation, on which economic rehabilitation and survival of the country is dependent.

Tax collection on an equitable basis and in an inadequate amount in any country is of course a very tough business but at the same time a necessary condition for running the government and providing the necessary services to the public at large.Unfortunately, however, in Pakistan, the government machinery, as indicated by the news item, seems to have lost resolution to do the dirty work.In fact, there is an oblique insinuation and a broad hint in the said briefing of shifting such a responsibility to other organs of the state or to the provinces.

By this, we don’t mean to say that either the competence or the integrity of the economic managers was questionable, but only to state that the economic team seems to be highly frustrated with the present situation due to the apathy of the political leadership and lack of proper co-ordination at various levels of the government.This is definitely a legitimate cause of worry and a portent for fiscal management of the country.Already, honest taxpayers hardly see any wisdom in paying taxes when influential and powerful sections and sectors of the country continue to keep themselves out of the tax net due to their strong-arm tactics in political arena.

If this tendency continues, it is not difficult to visualise the future of the fiscal policy in the country and its ugly consequences on other areas of the economy.Other observations of the economic team are quite objective and timely but most of the problems could be avoided if reasonable progress could be made on the fiscal front.

In this context, we feel that briefings and statements would not help matters much if these are not backed by politicians, by solid action on the ground.An open admission of helplessness by the economic team and indifference on the part of political leaders at the helm could only encourage those who don’t want to contribute to the government exchequer despite ample justification to follow the right course.

There are now one Federal and four provincial governments in the country.PPP is in coalition in four of the five while PML (N) in the largest province of the country ie Punjab.It is a matter of grave concern that no government, not even the Punjab government, which is distinguishable from rest in terms of revenue collection and expenditure control, can provide a role model.This does lend support to critics who feel that the two largest political parties way of governance is not going to deliver and a wholesale change is required.

A wholesale change did come in 1999: a bloodless coup.There was indeed an economic turnaround in the following years.But it was largely due to exogenous factors such as financial assistance from abroad after 9/11.Restoration of democracy is now being made synonymous with bad governance which is dangerous as it only helps those in favour of the Machiavellian tendencies.

We hope the economic briefings is viewed as a wake-up call for politicians to agree to a minimum economic agenda which provides continuity of policies instead of adhocism which has become the hallmark.The IMF – with the help of Germany and France – has imposed technocratic governments in Greece and Italy.The global lending agencies could do the same with us – when we go running to them next time for help with our balance of payments. – Brecorder