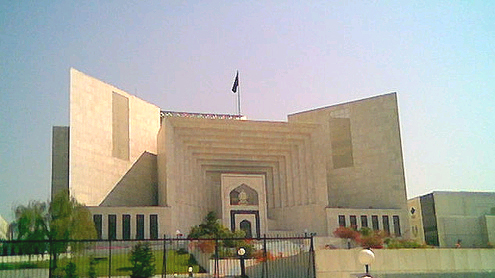 Happy families are all alike, said Leo Tolstoy; all unhappy families, however, are unhappy in their own way. In Pakistan, the reverse is true if one analogises with the well-being of citizens in Pakistan’s hundred-odd districts.

Success stories in districts that work would be varied, like some initiative by a Nazim or a DC in sewerage, economic empowerment or maintenance of public order. It is in some of our dysfunctions, really, that the vast expanses of the countries are alike. Chief amongst these is the problem with the courts. A person from Swabi could empathise perfectly with a stranger from Nawabshah were the latter were to bring up her troubles with the district sessions court. An unlikely engine of national unity.When the honourable chief justice decries the fact that the rich and the poor have a different relationship with the law in the country, like he did the other day, while heading a three-member bench on the issue of encroachments on the lands of the Pakistan Railways, he should remember that in this case, he is no mere passive observer like he is before he takes suo motu actions over sugar prices and the like. Here, the judicial services of the country represent an integral and, indeed, the most important part of the problem.

The situation in the lower courts is most disturbing and, at the risk of sounding contemptuous, the state of affairs in the higher courts also needs much reform. Cases take years on end, with a particular breed of lawyers specialising specifically in getting the courts to drag on and on. Family savings are eaten into in the pursuit of just legal recourse.The nationwide movement for the restoration of the judiciary, limited not just to the lawyer community, was prompted by the gross injustice meted out to the dispenser of justice. But it was also motivated by a hope that things will change with regards to the courts. The administrative reforms that followed the restoration could, perhaps, not live up to those lofty expectations. The backlog of cases remains huge and a polity wonders whether the principle of speedy justice is being sacrificed at the altar of judicial activism. – PT