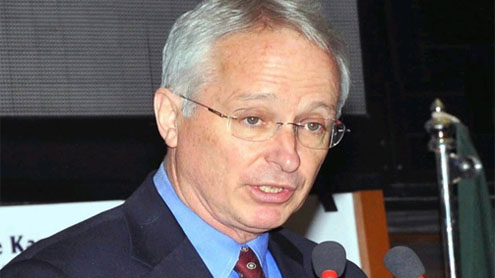 The United States Ambassador to Pakistan Cameron Munter while addressing the prestigious Harvard Kennedy School stated that the US needs to move from a relationship of aid to Pakistan to a partnership of trade.

The plea to support trade as opposed to aid has been voiced periodically by governments of several indebted countries around the world – a plea premised on numerous experiences that indicate that aid together with its attached strings leads merely to further entanglements in its web, rather than any meaningful development in the quality of life of the people it purports to benefit.The question is why this basic altruism has not been proactively pursued by either the West or indeed by the multilaterals.

The answer is quite simple: while free trade in economic theory guarantees that consumers throughout the world benefit as it allows them access to the cheapest possible product available globally, yet in reality, the West has set up barriers to specific items notably farm produce, cotton and related products with the objective of protecting its domestic industry, especially industry where a large number of votes accrue.In this context, the farm policy of the West as well as cotton and textile restrictions have harmed the economies of the developing countries, mainly because these items constitute their major exports.

Pakistan is a case in point.Our major export items are subjected to quota restrictions, thereby compromising our ability to increase our exports.Be that as it may, the onus of unfair trade practices cannot all be laid at the doorstep of the rich countries.The developing world is not barred from producing non-farm high value-added products that are not subject to the vagaries of weather.Pakistani governments must therefore accept responsibility for failing to provide an environment conducive to enhanced non-farm based productivity.

In addition, the energy crisis of the last four years has seriously compromised the export sector’s ability to produce at optimum capacity while throughout our history a set of policies that simply do not provide a level-playing field to our domestic private sector have been followed.In this context, it is relevant to note that some countries with careful planning and sustained reforms have come out of their previous heavy reliance on aid syndrome with our two regional neighbours India and China presenting a role model.Pakistan in contrast remains mired in the debt trap and it is unfortunate that our exports remain traditional while the price of our imports continues to rise.

The US however has emerged as a fickle economic partner for Pakistan and continues to do so – a fact that Munter may have alluded to when he said: “we have over-promised not because we meant to over-promise but because there was so much of an effort to build a strategic relationship from issues like water to the role of women in the country.” The Kerry-Lugar bill envisaging 1.5 billion dollars a year remains an over-promise, paying off our military bills as agreed from the Coalition Support Fund remains an over-promise, insisting that Turkmenistan-Afghanistan-Pakistan-India gas pipeline would begin delivering the fuel necessary to meet our severe energy shortage remains an over-promise, and the assistance to the energy sector to resolve our ongoing shortages remains an over-promise.

In addition, the US has played an obstructionist role in projects that would benefit us materially through enhancing our productivity notably the Iran-Pakistan gas pipeline.Munter added that what Pakistan wanted was “partnership and a better sense of respect.We need to expand to get them out of a certain narrative that they have created about the US.” Almost certainly, but Munter must accept his own role as well as of other senior members of the Obama administration to leave no opportunity to embarrass Pakistan’s civilian government and military establishment.

Examples of this abound dating back to the Raymond Davis issue and the attack on the Osama bin Laden compound.Munter’s revelation that US supplies were being delivered through Pakistani airspace at a time when the government insisted that the parliament would determine future bilateral relations, and his attempt at interference by stating that if General Pasha goes, then the CIA-ISI relations maybe compromised are more recent though equally embarrassing examples.Munter surely must understand that if the US does not change the narrative now, the elections scheduled for the final quarter may well bring a party to power that would not be in US interests. – Brecorder