The issue of new provinces 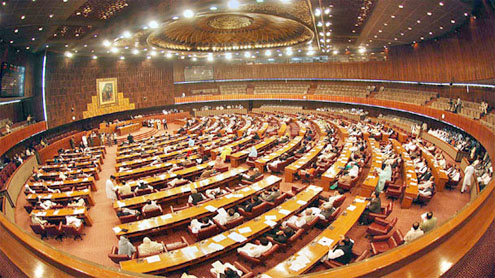 The National Assembly (NA) was subjected to such uproar the other day that the session had to be temporarily suspended to allow heated tempers to cool.

The issue that agitated the legislators from two parties, the MQM and the ANP, was regarding the former’s attempt to have a resolution for the creation of a Hazara province in the Hindko-speaking areas of Khyber Pakhtunkhwa discussed in the house. Although the discussion was eventually postponed, the amount of heat it generated added little to the understanding of a complicated but critical issue. The Prime Minister (PM) too whaled into the fray by advocating the creation of a Saraiki province in southern Punjab. Gilani said the creation of new provinces was the need of the hour and if a Saraiki province was not created during the tenure of a Saraiki-speaking prime minister, when would it happen, if ever? The PM therefore charged federal minister Khursheed Shah with the task of discussing the issue of new provinces with the government’s allies to forge a consensus before moving a resolution in the NA.

It is interesting to note that the desire for new provinces is rooted in the belated devolution under the 18th Amendment. The exercise has sparked off, on the one hand, demands for a Saraiki and Hazara province, and on the other, opposition from the parties ruling in Punjab and Khyber Pakhtunkhwa. In the latter case in particular, the ANP’s umbrage at the suggestion from the MQM is at odds with its earlier stated position that if the people of Hazara clearly expressed a wish for a new province, the ANP could contemplate it. In other words, from a stance that spoke of a democratic solution to the issue, the ANP has veered towards a ‘defence’ of the not so long ago renamed entity now called Khyber Pakhtunkhwa. The PML-N is known to be averse to the idea of carving out a Saraiki (or Bahawalpur province) in southern Punjab, because it would truncate its ‘fiefdom’. Similar sentiments seem to underlie the ANP’s latest position on the Hazara province.

The whole exchange generated more heat and noise than light. The issue of creating new provinces is too important to be reduced to a ‘political football’ or mere tit-for-tat point scoring. Pakistan’s history is witness to the fact that for long years, the country was an overcentralised state, a structure inherited from colonial days and continued after independence at the behest of powerful vested interests that were not prepared to concede democracy, let alone a democratic federal structure. East Pakistan’s fate may well have been different if this suicidal blinkered vision had not dominated for so long.

The other question is what should be the criteria for determining whether new provinces should be created or not? Conservative views insist this should only be done for administrative convenience. The party that clearly adheres to this view, the PML-N, is on the other hand reluctant to follow through on the logic of devolution under the 18th Amendment to restore (in better, improved form than the gerrymandered Musharraf local bodies) local governments to provide precisely the administrative convenience to citizens so otherwise beloved of the PML-N.

The other view, rooted in a historical understanding of identities, argues for new provinces, or even perhaps a redrawing of the existing provincial boundaries on linguistic/ethnic bases. Although this notion is correct in principle, in the concrete situation of Pakistan, it is bedevilled by many complications. If accepted, the principle could possibly give rise to demands for separate provinces not only for southern Punjab and Hazara, but also a Pakhtun province to be carved out of northern Balochistan, an Urdu-speaking province in Sindh, claims on the ethnically Baloch areas of south western Punjab, and perhaps more that do not readily come to mind.

How then to arrive at a universal principle that could satisfy cravings for new or redrawn provinces and yet be acceptable to all through a consensus? Whether on administrative or linguistic/ethnic lines, first and foremost, the will of the people of a particular province as a whole, and then the area under consideration for a new province has to be determined transparently and democratically. Referenda could be one method of ascertaining the opinion of the province and the area in question, as is the case in many democratic countries.

In Pakistan’s specific instance, irrespective of such exercises of ascertaining the popular will, the constitution’s Article 239 (4) lays down that no bill to amend the constitution that would have the effect of altering the limits of a province can be presented to the president for assent unless it has been passed by the provincial assembly of that province by a two-thirds majority. It then also requires a two-thirds majority in both houses of parliament in order to pass muster. The conceptual and ground complications of creating or redrawing provinces are forbidding enough. The legislative route could be even more tricky and difficult. That is why, perhaps, desire notwithstanding, it is not as easy as it may seem.