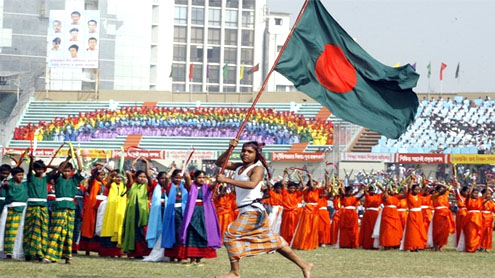 The fall of Dhaka on December 16 was an event that not only brought humiliation upon us at the hands of our sworn enemy, but also resulted in the separation of the Eastern Wing of Pakistan to form an independent state, Bangladesh.

It is heartening to know that the old memories of discrimination and rancour that once rankled with our East Pakistani brothers have now given way to feelings of amity and close friendship, more than what generally characterise Muslims anywhere in the world. No doubt, our attitude of understanding of their stand and admission of our own follies that led us apart have their contribution in changing their thinking.

Nevertheless, today is the time for our ruling circles to do a bit of soul-searching. Have we learnt any lesson from this debacle and are we scrupulously avoiding a repeat of those fatal mistakes? Have we been able to pinpoint the specific reasons that made them take their road to a new and separate homeland? After all, the two had struggled together for the creation of Pakistan.

And it is commonly believed they were passionate patriotic Pakistanis, even more than those belonging to the Western Wing.Indeed, India played a most venomous role to avenge the establishment of Pakistan that the Congress, the party which had fought for the South Asian subcontinent’s independence, had bitterly opposed. Its commanding officer in Dhaka, General Manekshaw, to whom his Pakistan counterpart surrendered, later disclosed that his army had trained a big force of mukti bahini, including 80,000 Hindu soldiers, and inducted them into East Pakistan to fight Pakistan Army. But for all its evil intentions, New Delhi would not have succeeded in breaking up the country, if the ground for an uprising did not already exist.

Even though a majority of the population lived in the Eastern Wing their share in governance and, of course, in development had lagged behind. The argument that the relatively more developed areas take off sooner than the less developed would not prove convincing to the East Pakistanis.The pity now is that we seem to have forgotten that chapter of discrimination and even now are not providing a fair share of our resources to certain less developed regions. Balochistan, for instance, has a constant complaint of neglect, even though it is endowed by nature with abundant resources – natural gas, precious metals, mineral and what not.

The so-called Aghaz-e-Haqooq-e-Balochistan launched in 2009 has taken off in patches, showing a lack of commitment on the part of the federal government. Other areas like rural Sindh have similar complaints and local politicians in southern Punjab are basing their demand for a Seraiki province on similar grounds. The need of the hour is to do all that can be done to prevent the feelings of alienation in any part of the country. That is only possible by jettisoning self-enrichment, nepotism and favouritism, sparing resources and viewing Pakistan as one single unit and meeting legitimate needs of all and sundry inhabiting it. – Nation