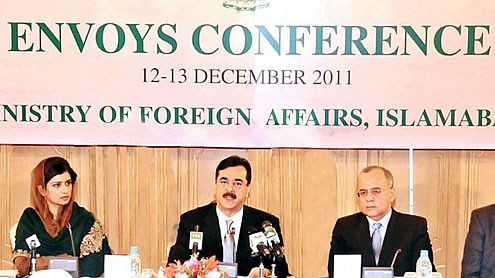 The two-day envoys’ conference that concluded at Islamabad on Tuesday opted for a complete recast of our relations with the US and revisiting Musharraf’s agreement to get written assurance for respect of Pakistan’s sovereignty and an official apology from Washington for the unprovoked Nato attack on the Salalah check post on November 26.

Prime Minister Gilani defined sovereignty as the baseline of Pakistan’s foreign policy. The conference agreed that Pakistan would not lift the blockade of Nato supplies till such guarantees were received. The Ambassadors were also of the view that reliance on US aid must be reduced.

These decisions come in the wake of the Nato attacks in Salalah, which have raised expectations of the government by the people of Pakistan to take a firmer stance than before. The all parties’ conference and Parliament also prescribed the same. There is little doubt that the nation is ready to make sacrifices to secure national honour and sovereignty. If the US aid is indeed reduced, it will have to be followed by a strict regime of austerity practised by the high as well as the low in the country. Only with the full utilisation of our resources, would it be possible to bail the country out of its current economic predicament. It is good to note that a detailed procedure for the clearance of Nato containers, tankers and trucks passing through Pakistan was also spelled out. That would make these vehicles’ movement smooth, reducing the chances of pilferage and other untoward incidents on their way from the Karachi port to the border crossings into Afghanistan. Pakistan would be justified, as the conference decided, to conclude a ‘formal and well-enforced agreement’ with the US and the Nato for monitoring these vehicles. Under this agreement, heavy taxes, including customs, levies and import duties would be imposed and a strict criterion of customs clearance of these shipments enforced. Besides, the moot recommended bringing about a total convergence of Pakistan’s political, diplomatic and military interests. “It’s important that Pakistan’s pursuit of strategic endeavours is not to collide at any point at political, diplomatic and military levels. National consensus is the key to reflecting a nationalistic agenda in our foreign policy,” remarked a participant.

To sum up, the conclusions of the conference were the right response in a time of crisis. As we have noticed, the drone strikes are on hold for fear that the planes might be shot down, and attempts are afoot to woo Pakistan. Even the hawkish Defence Secretary Leon Panetta now does not see victory in Afghanistan without Pakistan’s support. Of course, the idea is not to have a total break of relations with Washington, but this is just the moment to make it commit to all that falls under the domain of our national interest.