Why Pakistan must borrow 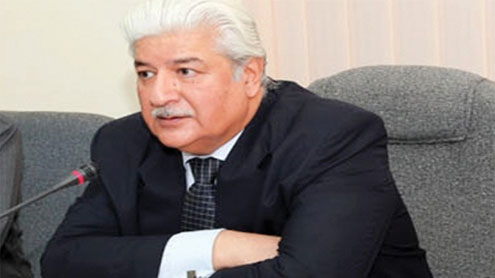 Federal Board of Revenue Chairman Salman Siddique has said that of the total Rs 1558 billion collected by his organization last year, Rs 750 billion went on debt servicing, Rs 441 billion to defence, and FBR retained a paltry one percent of the collection.

Speaking to Lahore Chamber Of Commerce and Industry on Saturday, he said that after the passage of National Finance Commission award, nearly 60 percent of revenue went to the provinces, leaving the government no alternative but to borrow. Thus, Pakistan is seeking the issuance of a Letter of Comfort from the IMF and for this, it must undergo article IV consultations with the Fund, which involve it coming in and reporting on Pakistan’s economic health and future economic problems. This will allow the IMF to dictate policies to Pakistan, even though Pakistan is no longer on an IMF programme.

Obtaining a letter of comfort is a precondition by both the World Bank and Asian Development Bank of their loans of $500 million each. Thus, even though Pakistan will no longer borrow from the IMF, it will still have to let it set its economic direction, because Islamabad will have to continue to plug its deficit by borrowing from institutions belonging to the Washington Consensus. These international financial institutions do not make purely economic judgements, but are also malleable according to the political needs of their major stakeholders, most notably the world’s only superpower.

Perhaps, the most important sign of this is that while the IMF and other Washington Consensus institutions are very insistent on Pakistan carrying out power sector reforms (which is a euphemism for hiking power tariffs further), adding a value adding tax and other measures which will increase pressure on the poorest segments of Pakistani society, there is no examination of how to end waste in government, which allows officials, both elected and permanent, to maintain luxurious lifestyles at the taxpayer’s expense, or of how to raise fresh revenue by taxing sectors, so far left untouched. One such sector is agriculture, taxing it would mean taxing legislators across the party divide, who are mostly members of the land-owning elite.

However, Pakistan should not look to the IMF as gospel for guidance that would help it with its problems. It should be noted that borrowing only means an increase in debt servicing, and a further deeper grip of the international financial institutions upon the economy, and consequently of the West upon policies which ought to be independently formulated in Pakistan. We must develop and follow long-term policies which maximise revenue, without further burdening that narrow section already over-burdened by taxation and while taxing those persons who can easily afford to pay their taxes, but commit the criminal offence of not doing so. – Nation

Fashion on the roll