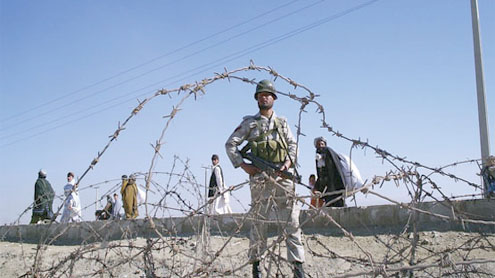 The sudden massing of hundreds of American troops across the North Waziristan Pak-Afghan border, equipped with gunship helicopters and other heavy weaponry, backed by a well-stocked airbase nearby, has sent alarm bells ringing among the tribesmen on either side, and put the Pakistan security establishment on full alert, which has confined itself to saying that it is monitoring the development.

According to press reports, entering the Gurbaz area of Afghanistan’s Khost province during the night between Saturday and Sunday, US soldiers are seen occupying hilltops and monitoring the border region. They have not only imposed a curfew in Gurbaz, but also started house-to-house searches, it is believed to get hold of militants who, they identify as part of the Afghan resistance. The Ghulam Khan-Khost Road has been closed to traffic, with the result that 900 trucks and vehicles carrying passengers have been stranded.

Among the trucks are quite a large number, which have NATO goods loaded on them. The Gurbaz tribesmen inhabiting either side of the border are extremely worried about the passengers on board the stranded vehicles because most of them belong to their tribe. The atmosphere is charged with tension, while the concentration of foreign troops has made the tribes living in North Waziristan uneasy.

The traditional spirit of pride, valour and resolve to defend their homeland at any cost, from all persons seen as invaders will be running high. Well-known tribal elders, Malik Mamoor Khan and Malik Nasrullah Khan, though confident that the Americans would not attempt an invasion North Waziristan especially in light of their unsuccessful, inconclusive decade of experience in Afghanistan, have expressed similar views.

“It will be a blunder on their part if the Americans enter North Waziristan,” said one of them; the other asserted that the tribesmen would never allow any foreign force to step foot in their land.
The development will make many hark back to the recent press reports of warnings of invasion that top military leaders in the US have been noticed to issue, one after the other.

The setbacks the US forces have met in Afghanistan have not been received well in the States by ordinary US citizens. It appears that desperate attempts to salvage the reputation of the forces are being executed by the US establishment and Obama administration. Their ‘imminent’ exit from Afghanistan must be conveyed to the world at all costs as a victory. With these factors in view, our leaders must be wary.

Defence Minister Ahmad Mukhtar, has already issued a warning to the US not to test Pakistan’s patience on drone attacks. The Minister should also take immediate note of the alarming development of troop concentration on our border; which constitutes a direct threat to our sovereignty, going well beyond that perpetrated by the drones.

Should any foreign troops attempt an invasion, the nation holds the expectation of its armed forces to defend the country at all costs. In case the Americans and their NATO allies launch a short-sighted, foolish adventure against our tribal lands, they will have to be instructed in the etiquette of observing sovereignty by our Armed Forces. – Nation