And they run away… 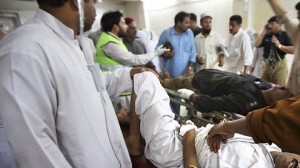 Just after a day of twin deadly blasts, the terrorists struck Peshawar again on Friday as the Taliban in an ambush opened fire on a police van, successfully freed two of their comrades from police custody and escaped. Three policemen lost their lives in the incident.Such an attack on police personnel is not a new phenomenon.

The members of the terrorist organisations have been attacking and releasing their members from police custody even in court premises. Friday’s incident underlines the incompetence of our police force in keeping guard over such dangerous criminals while transporting them. Senior police officials have confessed that they were not informed about the prisoners’ travel for a dental check up so security could not be beefed up appropriately.

The police personnel did not follow the due procedure required for taking the prisoners out for a medical check up and the laxity and casualness on their part caused the incident. The security forces of the country are the number one target of these terrorists and despite having suffered deadly twin blasts just a day earlier in the city, the police showed utter slackness. The information about the travel of the terrorists leaked out and in the absence of foolproof security arrangements, they whisked them away on the road. Fortunately no passerby was hurt in the crossfire which took place on the busy University Road.

As we are faced with extraordinary circumstances, being engaged in the war on terror, there is a need for making extraordinary arrangements. Our enemy is ruthless and dealing with it requires extensive training of our police personnel. They should be equipped with modern arms and the technique to effectively control the situation in such attacks. Ideally, armoured personnel carriers (APC) should be used for the terrorists’ transportation.

We have a lot of problems in conducting the war on terror. The flaws in the legal prosecution structure make it difficult to deal with captured terrorists and often they have to be freed due to unavailability of adequate evidence against them. Our laws of evidence require a level of stringency that makes prosecuting the terrorists difficult in most cases. The preventive detention laws allow only 90 days in detention after which terrorists are released and they resume their terror activities. There is no witness protection programme, which also makes the prosecution side weaker while bringing a terrorist to book. Pakistan has been engaged in the war on terror since 2001, but still its anti-terrorist laws are so weak, vague and ineffective that one can only feel sorry for the country. – Dailytimes