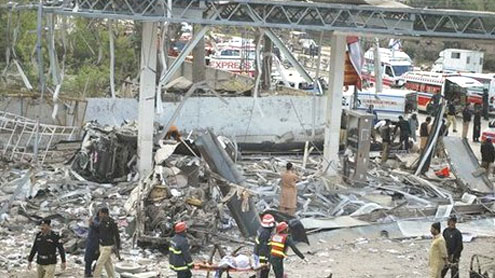 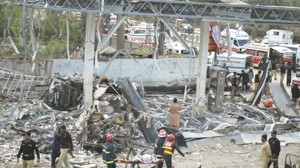 Although the bombings in Faisalabad and Adezai were conducted in two different areas, using different methods and for different reasons, they have been perpetrated by the same forces that want to destabilise Pakistan. The Faisalabad attack took place near the office of the Inter-Services Intelligence (ISI) on Mall Road. Being unable to breach the security cordon of the ISI office, the militants exploded the car bomb at a nearby CNG station, taking 25 lives of innocent bystanders, and injuring more than a hundred people, some of whom are in critical condition. Reportedly, the Tehrik-e-Taliban Pakistan (TTP) has claimed responsibility for this heinous act, stating they did it in retaliation for the security forces’ detaining and later killing one of their senior members in Faisalabad. In Adezai area near Peshawar, a suicide bomber attacked the funeral of a peace committee member’s wife, which was attended by a large majority of Adezai lashkar (militia) members.The Adezai lashkar was formed to protect the local community from Taliban militants. By several accounts, this private militia constituted by the local people stood as a bulwark against the advance of the Taliban to Peshawar. However, lack of support by the military and the government compelled them to threaten that they would lay down their arms and make peace with the Taliban for survival’s sake. The existential question for them is why should they expose themselves to attacks by the Taliban if the government is not interested in supporting them.All this reminds us that that the military establishment and the ISI have been playing with fire for a long time and now that fire has spread and arrived at their own doorstep. ‘Strategic assets’ created to secure dubious goals in Afghanistan are wreaking havoc in that country and also spilling the blood of Pakistanis. One might ask whose interests are these ‘assets’ securing if not the people of Pakistan, who foot the bill of all these adventures and then pay the additional cost of this treacherous game with their lives. Pakistan’s security agencies will have to scotch the monster they have created, and the sooner they do this the better.

Also, it would not be in the interest of the military itself to alienate peace lashkars created to fight against the same elements the military is fighting. If the Adezai lashkar members had been uncertain about which way to go, this suicide bombing must have cleared their minds. Arranging for the security of the community in defiance of the Taliban has cost them heavily. For them, there is no hope of military or other assistance and making peace with the Taliban is probably the only option. If they do not do it now, they would risk being attacked again.Last but not the least, the buck stops with the interior ministry, which is responsible for the country’s internal security. Rehman Malik has miserably failed to devise and implement a credible and coordinated plan that would ensure that each head of the hydra of militancy is cut off. Despite his blatant failure, the federal government insists on retaining him at this post. It would be in the best interests of the country for someone more capable to be given the challenge and task of providing security to the citizens of Pakistan – Dailytimes