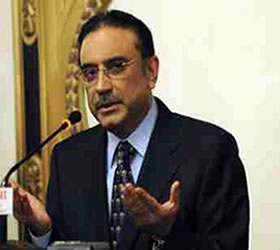 President Zardari has finally replied to Mian Nawaz Sharif’s letter sent more than five weeks back. Besides briefly replying to some of the points raised by the PML(N) leader, the letter presents a detailed defence of the PPP’s policies, enumerating at length its achievements and its ongoing initiatives for the welfare of various sections of society and for the benefit of the country. The letter also accuses the Punjab government of fiscal indiscipline leading to large scale bank borrowings and exposes the PML(N) leadership’s flip-flops over the RGST bill. While a ruling party is within its rights to criticise an opposition party and project its own accomplishments, it would have been more in accordance with statesmanship if the letter had been released to the media after ensuring that it had reached the PML(N) leader.

As this was not done, the move is being depicted by the other side as primarily aimed at point scoring. The letter has been sent to the media at a time when two of the partners in the ruling coalition have unleashed a barrage of criticism against the PPP, with one threatening to leave the coalition and the other maintaining that its decision to sit on the opposition benches is irrevocable. This has led the government’s critics to maintain that the letter is, in fact, an exercise in damage control aimed at pressurising the deserting allies by making it known that the PPP is not keeping all its eggs in one basket.There can hardly be two opinions regarding President Zardari’s contention that difficult decisions need to be taken to bring the country back from the brink and that this requires cooperation between the PPP and PML(N). However, good wishes alone are not enough. What is of paramount importance is a change of heart on the part of the leadership of the two parties.The unending contention between the two mainstream parties provides encouragement to political non-entities, like Musharraf, who are itching to regain the center stage that they lost in 2008 elections. Unless the PPP and PML(N) abandon the pursuit of short term gains, their strife could cause a serious set back to democracy. In case this happened, both stand to lose public sympathy for a long time to come – PT