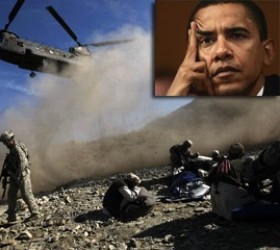 It was not unexpected that the Obama administration’s review of war in Afghanistan would lament Pakistan’s ‘inadequate’ efforts to root out terrorist safe havens in the Pak-Afghan border region (North Waziristan Agency), and, would, therefore, urge it to get more active in this behalf. Thus, even before the latest AfPak review was announced by President Obama on December 16, US Joint Chiefs of Staff Chairman Admiral Mullen had expressed his impatience with Pakistan at not taking armed action in NWA. And soon after the US President had spoken in the same strain, while presenting a summary of the review before the media at the White House, his envoy at Islamabad had demanded Pakistan to take immediate military action in the agency. Ambassador Cameron Munter reiterated what other American officials had been saying that Islamabad had given assurances about launching the operation but was looking for a suitable moment to do so. However, the US wanted earliest action. The urgency in his words recalls to one’s mind his President’s commitment to thin out the troop strength by mid-2011 from Afghanistan and recaptures one of the recent findings of US intelligence agencies, which states, ‘the US-led war effort would be doomed unless Pakistan cracks down on militant sanctuaries inside its border’. Another top official to declare that these safe havens were ‘a major strategic vulnerability’ was General James Cartwright, Vice Chairman of the Joint Chiefs of Staff, who is likely to succeed Admiral Mullen when he retires next year.
The pressure, while it is designed to serve the American interest of plugging all possible channels of support to the Taliban, overlooks Islamabad’s core concern about safety of its citizens. The entire country is living under the shadow of the fear of terrorist bombings as a result of its self-destructive decisions to participate in the Afghan war and then to take action against its own tribesmen. Pakistan armed forces’ move into NW Agency, instead of working towards reconciliation with the wronged people, forebodes a more dangerous scenario. But that, particularly at this stage when the US wants to prepare for the withdrawal to begin, is of little worry to the White House. That is why President Obama talked of the effectiveness of the drone attacks, and the CIA was, perhaps, looking for a nod to open a new drone front in Khyber Agency where its planes hit for the first time on the very day of Ashura, killing nearly 60 people, in utter disregard of the sanctity of the occasion for the people of Pakistan. – The Nation

Snow at Heathrow and Gatwick ruins plans of thousands