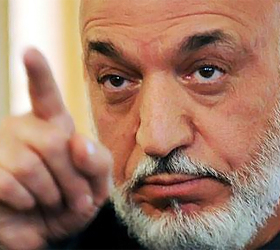 At long last, after Pakistan has borne the brunt of drone attacks for years on end, which more often than not missed the targeted militants and, instead, killed nearly two thousand innocent civilians, Afghan President Karzai has had a change of heart about their justification. From an open supporter of these deadly sallies and even an advocate of ground invasion of Pakistan to wipe out the ‘terrorists’ located in the border region of the two countries, he has suddenly felt that these attacks, and the violent reactions they have produced, have caused greater suffering in Pakistan than Afghanistan, and has opposed them.

The shift, sadly belated, is welcome indeed and would prove to be helpful in removing the distrust that the Afghan attitude since the American aggression has caused in Pakistan and pave the way for a deeper understanding and friendship between the two countries. It is noteworthy, however, that Mr Karzai’s interview in The Washington Post in which he expressed these sentiments, also contains a severe condemnation of the nightly raids of Afghan homes being conducted by US forces in capture-and-kill operations. It seems that after the Afghan President had realised where the shoe pinches, he came to sense how agonisingly painful, both for the people and government of Pakistan, the experience of drone attacks also was. But to his credit goes the acknowledgement that his criticism of Islamabad was not justified in view of suffering these drone attacks have provoked. He should know that Pakistan and its people feel the same pain when their Afghan brethren suffer brutal treatment at the hands of imperialist powers.

It would, therefore, be unwise to open old wounds, and Islamabad must respond to Mr Karzai’s remarks with genuine overtures of brotherhood and friendship that the people of this country cherish for the people of Afghanistan. The two have so much in common that it is hard to pinpoint one single most important factor of their closeness: the ethnic factor, the common religion, the shared historical experience or simply the contiguity of borders, and vast open borders at that, which no sane person can ignore in the context of achieving the goals of peace and progress in the two countries.
The other significant change that has come out in the interview is his impatience with the prolonged presence of foreign forces in the country and their “intrusiveness into the daily Afghan life”. We entirely agree with him in this posture as well as the accusation that the billions of American dollars to unaccountable contractors were fuelling corruption. There is neither moral authority nor international legal sanction for nightly raid, and the logic of an unidentified NATO spokesman that the alliance had no alternative is simply rubbish. President Obama must make sure that he begins winding up the operation in Afghanistan and ends it quickly, and through peaceful negotiations where Pakistan plays its due role – Nation