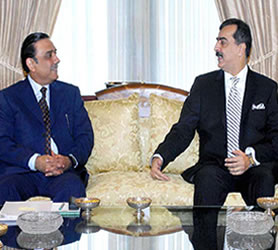 Despite our poverty we sit on untold riches. A report in this newspaper has revealed that in Balochistan there are vast deposits of gold and copper – in geological terms an extension of the seams that are soon to be exploited in Afghanistan. Such is the scale of these deposits that their extraction and sale could dramatically alter our economy – for the better – for decades to come. We might have expected to have heard from this government – and its predecessor for it was on their watch that the full scale of the deposits was realised – as to the good news that would shortly be announced. But have we heard of our bonanza being trumpeted? Most certainly not, at least not beyond a few sketchy and confused reports in the media over the years. Today we know why. This government, quietly picking up where the Musharraf regime left off, has been cooking a set of deals with foreign mining companies that look set to benefit them beyond the dreams of avarice and benefit those in the government who are brokering the deal.They are in on this at the very top. President Zardari, Prime Minister Gilani and the governor of the State Bank all have their fingers in the pie. At one level this is right and proper – resources such as this require attention from the very top. Yet at another level the business is being conducted with such a lack of transparency, indeed perhaps deliberate obfuscation in order to throw an inquisitive and sharp-nosed media off the scent, that there is an overpowering stink of corruption leaking from the seams of the nascent deal. Currently, the foreign mining companies are working under exploration licences, used to determine the viability of the deposits in terms of extraction and profit. They now want these turning – and quickly – into mining licences, which are a different kettle of fish entirely. Such is the irregularity, even within the murky world of the global mining industry, that a New York corporate executive in the mining industry is of the opinion that everything should be put on hold before any binding contracts and deals are signed and the whole matter placed before the Supreme Court for investigation. This would seem the appropriate course of action. Billions of dollars are at stake, a national asset appears being traded down for peanuts, there is no process of accountability and millions have probably already disappeared into the accounts of the various players – Thenews