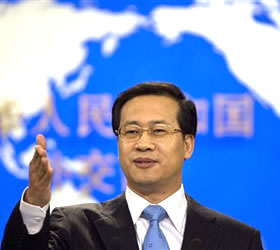 CHINA has rejected a United States proposal to mediate in Beijing’s territorial dispute with Tokyo, which has raised security concerns in East Asia in recent weeks. Chinese Foreign Ministry spokesman Ma Zhaoxu says the United States has no place in the dispute between Beijing and Tokyo over islands in the East China Sea. Ma says the dispute is between China and Japan, and the islands have been “inherited Chinese territory” since ancient times. His comments on Tuesday come after U.S. Secretary of State Hillary Clinton offered last week in Hanoi to host talks between the two Asian powers to ease tensions. On Tuesday, Clinton said the offer still stands and the talks would not focus solely on territorial issues.Ma say China prefers to use existing regional dialogue mechanisms to settle the dispute over the islands, called the Diaoyu in Chinese or Senkaku in Japanese. Japan controls the islands. He also says Secretary Clinton was “wrong” in her remarks last week that the U.S.-Japan mutual defence treaty applies to those islands. The problem came to the fore in September when a Chinese fishing trawler collided with Japanese patrol boats near the islands and Japan detained the boat’s captain. That sparked outrage in Beijing, which cancelled meetings with Japan and restricted the export of rare earth minerals to Japanese manufacturers. Tokyo later released the captain but anti-Japanese protests have erupted in some Chinese cities since then. Last week, Chinese Premier Wen Jiabao and Japanese Prime Minister Naoto Kan met informally in the sidelines of the East Asia Summit in Hanoi – Dailymailnews