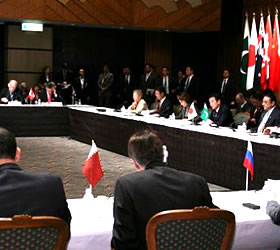 The Friends of Democratic Pakistan (FoDP) met in Brussels on Friday to discuss the importance of the international community supporting Pakistan in its time of need. Twenty-six countries and four multilateral institutions attended the ministerial level meeting, where participants stressed the need for Pakistan to sustain its economic revival.Given the global recession, it might be asking for too much of Pakistan to do more in the immediate aftermath of devastating floods, which according to the Asian Development Bank (ADB) and the World Bank have cost Pakistan damages worth $ 9.5 billion, and in the thick of a war on terrorism that is crippling the country. It is wishful thinking that Pakistan will magically find a solution on its own in these testing times. The decision by the European Commission to offer trade concessions to Pakistan on 75 different product lines is much needed relief for our flailing textile industry. Also, the willingness of Italy to back a British proposal to open EU markets to Pakistan, despite the fears that up to 40,000 jobs could be lost to EU’s main textile producers, shows the urgency of FoDP help is sinkin in. These same concessions were denied to us earlier due to dumping allegations.

Another issue that was highlighted was the need for Pakistan to help itself by increasing its tax base. Rhetoric notwithstanding, what the FoDP is saying is not a restructuring of Pakistani society on equitable lines, but rather taxing the rich. Pakistan must tax the rich and the agricultural sector just like the ordinary citizen, but implementing long-term economic reform cannot be done overnight and will take time to materialise.

A serious concern for the FoDP is siphoning off aid money intended for the war on terror to purchase military hardware to be used on our eastern border. Although the present democratic government has taken pains to bring more transparency in the allocation of aid money; not a squeak was heard in parliament on increasing the defence budget by Rs 110 billion, while the country was grappling with the ravage of the floods. Remarkably, neither the government nor the army is willing to explain.

Under these circumstances it is understandable the FoDP wants Pakistan to do more to help itself. At the same time, it is imperative that the FoDP help the Pakistani economy in the short-term and medium-term. If they fail to do this, for whatever reason, the advances made in the war on terrorism will be undone, as poverty is the ideal soil for terrorist recruitment – Dailytimes