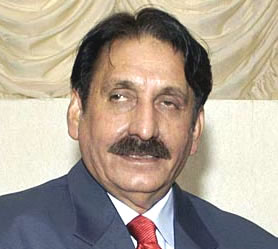 The highlight of Wednesday’s hearing on the review petition of the National Reconciliation Ordinance (NRO) verdict of the Supreme Court (SC) was the court’s remarks on the appointment of the National Accountability Bureau (NAB) chairman by the government. Chief Justice and head of the 17-member full court bench, Justice Iftikhar Mohammad Chaudhry, observed that this was “another non-adherence” to paragraph 180 of the NRO verdict by the government. In the light of the experience of several cases involving government, the court seems to have come to the conclusion that its instructions are being consistently ignored. Paragraph 180 of the NRO verdict, referred to by the honourable court, cites the judgement in the Asfandyar Wali Khan vs Federation of Pakistan case (PLD 2001 SC 607), which stipulates that the government would appoint the NAB chief in consultation with the chief justice of Pakistan. There can be disagreement on what the word ‘consultation’ means, and whether the advice of the consultee is binding or not, but the fact remains that the government did not fulfil this procedural requirement laid down by the SC. The purpose of such a consultation is to ensure that the prospective NAB chairman possesses unquestioned competence, impartiality and integrity. The appointment of Justice (retired) Deedar Hussain Shah has become highly controversial after opposition to it by the PML-N, and filing of petitions against it in the Lahore and Sindh High Courts. Another petition has now been filed in the SC challenging this appointment.

It is noted with regret that many of the recent appointments to several high level positions have been made in such a careless and sloppy manner that it was very hard for the government to defend its actions. Take, for example, the most recent appointment of the NAB chairman. One is at a loss to explain why the government ignored the NRO judgement. Are the law ministry and attorney general’s office so incompetent as to not be able to read and interpret the court’s judgement and act accordingly? There are other instances when the government’s conduct left much to be desired. Earlier, when it was clear that Ahmad Riaz Sheikh and Adnan Khwaja had been convicted by the courts and were beneficiaries of the NRO, their appointments as additional director Federal Investigation Agency and managing director Oil and Gas Development Corporation Limited respectively could, at best, be perceived as a show of defiance to the SC verdict. It seems that better sense is finally prevailing, as the prime minister has seen fit to sack two NRO beneficiaries, who were serving on the posts of executive director of the Pakistan Printing Corporation and managing director of the Federal Employees Benevolent and Group Insurance Funds. It should have been done much earlier, but better late than never.

Wednesday’s hearing was, once again, being looked at with great anticipation in view of the tension between the executive and judiciary. However, the SC exhibited grace in accepting Latif Khan Khosa’s request (under Order 26 Rule 6 of the Supreme Court Rules, 1980) to represent the government in the NRO case, following Kamal Azfar’s appointment as advisor to the prime minister. The court also gave him time till November 1 to prepare the case. It, however, expressed dissatisfaction over the NAB report on the steps taken for implementation of the NRO verdict.

From the conduct of the government in handling this case, one may conclude either it is hopelessly incompetent or oblivious to the consequences of its actions. It is beyond comprehension why would it want to convey an impression that it is indulging in delaying tactics. There may be genuine difficulties in the implementation. These could be shared with the court and the implementation process conducted with sincerity – Dailytimes