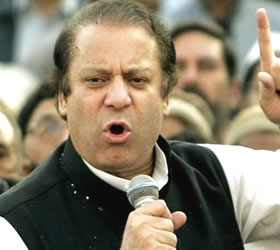 October 12, 2010 was observed as a Black Day by the PML-N on account of it being the day when, in 1999, Pervez Musharraf toppled the Nawaz Sharif government in a military coup. Rallies and protests were taken out by various PML-N leaders in Lahore and Hyderabad condemning Musharraf, accompanied by vows of making democracy a force to be reckoned with. They have also expressed their intent to mark October 12 as a day to defend democracy each year. It is ironic though that despite military rule being despised by most political parties, only the PML-N was seen protesting on the Black Day. It would have been more heartening to see other political parties partake of an occasion that provided an opportunity to condemn dictatorship. It truly is a black day if it is being marked by just one party.

Simultaneously, the PML-N passed a resolution in the Punjab Assembly condemning Pervez Musharraf and recommending that he be brought back to the country through Interpol and put on trial for crimes against the state, people and constitution. The resolution did receive unanimous approval in the house, even from the PML-Q, which was, interestingly, Musharraf’s party during his rule. However, the resolution should have named other dictators such as Ayub Khan and Ziaul Haq so that across-the-board disapproval for the men in boots becoming the men in politics could be accommodated.

Pakistan stands at that crossroads in its history where it has become blatantly obvious that military rulers, instead of being saviours, have cost the country dearly in terms of half the country breaking away and the remaining half being riddled with enormous problems. Our discontent with the present democracy notwithstanding, only democracy, although miserably feeble in Pakistan, can open the door to a more functioning and organised state. It is only in democracy that one can freely ask, express, demand and agitate for rights and aspirations. In a military dictatorship, one can barely hear a squeak of dissent. It is time Pakistan turns a corner in its history and makes clear that no matter how bad things may seem and how trying the times, autocratic solutions are not the answer – Dailytimes

Are PPP and PML-N in a race to hit the bottom?