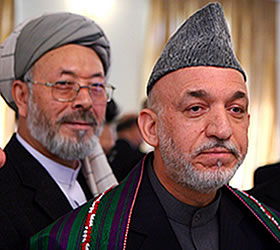 There may still be many scruples inhibiting the Afghan Taliban to sit with the Karzai government on the negotiating table, but such a possibility was never as real as now, or so it seems. The 68-member High Peace Council, headed by former president and Mujahideen leader Burhanuddin Rabbani, comprises men of all opinions and persuasions, to accomplish, in the words of President Karzai, “all that takes to make a compromise”.They include Mujahideen leaders, tribal chiefs, retired military and civilian officers and former communists. Although the formation of this council was agreed to by the Afghan grand jirga in June, its first sitting was held last week – to aptly coincide with the date, nine years ago, when the United States invaded Afghanistan. After nine years of war the Afghans need peace; that explains the timing of the first session of the council.As expected, the Afghan Taliban have not accepted the ‘invitation’ of the council; instead they have made a claim to be the principal power with ’75 percent control of Afghanistan’. But there is no reason why they should not be comfortable with the new initiative, as it largely meets their long-held position on joining any peace parleys.The council is not the same thing as the Karzai government the Taliban have shunned all along. Also, the Taliban are being invited as ‘a legitimate political group with sovereignty within its regional strongholds’. No doubt, the Taliban condition that they would not join negotiations unless the foreign troops leave Afghanistan remains unfulfilled.

But the very fact that its territorial control gets recognition and legitimacy should be no less important to the Taliban. Some of the groundwork for the peace negotiations had been done already, as President Karzai has confirmed holding talks with the Taliban “for quite some time”.So far these contacts were covert, although reports had surfaced from time to time of the ‘Saudis’ involvement, mainly through Pakistan. The Saudis, on their part, are said to be in contact on behalf of the Americans – even when the ISAF supreme commander in Afghanistan, General David Petraeus, insists these “overtures” were made by the Taliban to the Afghan government. But that doesn’t mean that the United States is averse to holding talks with the Taliban.

Most likely, Washington is being held back by an outdated military doctrine that for talks to succeed, these should follow battlefield superiority. We don’t know how history would vindicate the Nato engagements in Afghanistan, but as of now, these have brought the United States and European Union nothing but a large number of body bags and the ignominy of invading a foreign country. Since the invasion nine years ago, the Afghan conflict has cost foreign troops 2,014 deaths, including 26 during the last 10 days.

If the United States had attacked Afghanistan to punish the Mulla Omar regime for the hospitality it had offered to the al Qaeda leadership, then the time and opportunity has come to secure their separation. And that would be possible by sparing the Afghan Taliban of the rigours of the ‘surge’, which in practice, means more deaths, both on the sides of the coalition forces and the Afghan people.

While the Taliban are a local, or at best a regional issue, the al Qaeda is global phenomenon, its epicentre keeps shifting from time to time and place to place. The conflict in Afghanistan is nationalistic, or has come to be so, over the nine years of war. If and when conditions in Afghanistan come to harmonise with the national ethos, peace, however relative, will return. Given that the creation of the Rabbani-headed peace council has a pronounced touch of pragmatism and has the desired potential to succeed, it should be encouraged and promoted by all who have stakes in an Afghanistan that is at peace with itself and its neighbours – Brecorder

Everyone can fly with Miss Thailand 2005