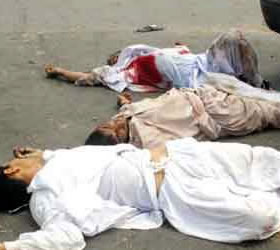 Unconcerned by the countrywide wave of anguish at the ruthless killings that have been taking place in Karachi during the past few months, the evil spirit that roams the city freely has refused to take respite. Last Monday was one of the deadliest days, when 12 Karachiites lay dead, most of them victims of target killings by supposedly rival groups. The leaderships, both provincial and federal, have only been indulging in giving meaningless assurances of security and making hollow promises of apprehending the culprits. Their plans, if they had any, have gone wrong because they either lack the ability or the will to put an end to the daily murders. As a result, the city’s social fabric virtually lies in tatters.Time was when the port city of Karachi was a peaceful place, populated with people hailing from different corners of the country, of different religious persuasions and walks of life, and possessing all sorts of skills and potential for work. They settled there in search of jobs or avenues of establishing their own businesses and thrived. Foreigners would freely visit Karachi to look for the possibility of striking a business deal or making investment in an industrial concern. It was a bustling city, with flourishing trade and industrial activity, ships sailing in and out with their cargoes, labour busy hauling goods up and down.

It was truly a cosmopolitan city, with a lot of social interaction and entertainment going on till late at night. The people of Sindh whose capital it was welcomed mohajirs (refugees) from India at the time of independence in the tradition of Islam. Similarly, Baloch, Punjabis and Pathans mixed with each other in business houses or social circles, without much regard to their backgrounds except in purely personal matters.

There was hardly any fear of life or property. The pattern of life presaged the evolution of a homogenous society in course of time, but, alas, all began to change when rivalries took root and some ethnic communities tried to assert their superiority over others, claiming their right to a greater share of the pie, which was ample enough to meet the requirements of all and more, had a sense of fair play been allowed to rule. Thus, the feeling that Karachi belonged to everyone in Pakistan was met with a rude shock, and the turf wars started in certain parts of the city – Nation