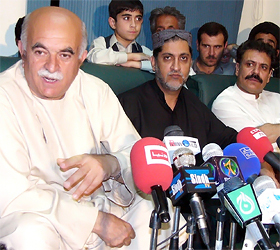 A five-year old child of a Pashtun trader was killed and some other family members of his were injured in a hand grenade attack in Panjgur District. With no group having claimed responsibility for the attack, the Pashtunkhawa Milli Awami Party, the largest political outfit of the Pashtuns in Balochistan, has strongly reacted to the incident. The central spokesman of the PkMP has said attacks on Pashtuns in Baloch areas would have a negative fallout on the relations of both the brotherly nations dwelling in Balochistan for ages.


Balochs and Pashtuns have a long history of living peacefully in the province. They have a distinct history of joint political struggle on the platform of erstwhile National Awami Party (NAP). Outstanding nationalist leaders like Late Mir Ghose Baksh Bizenjo, Sardar Attaullah Mengal, Sardar Khair Baksh Marri and Khan Abdul Samad Khan Achakzai Shaeed have impressed the historians with their meritorious political struggle for the rights of the people of Balochistan for many years. They struggled and spent jail stints together.

It is very unfortunate that the children of these veteran Baloch and Pashtun leaders, some of whom have passed away and the others are still around, could not continue with the excellent traditions set by their elders. Balochs and Pashtuns living in Balochistan face the same problems such as backwardness and underdevelopment. However, they have failed to revive the spirit of the National Awami Party (NAP) to demonstrate the strong political power of the two nationalities in Balochistan.

Balochs have been disappointed with the Pashtuns for the reasons that some sections of  them, while taking advantage of the ongoing conflict between Balochs and the Center, began to seek equal status, renaming of the province and disintegration of Balochistan. On the part, the Pashtuns complain that the Balochs have been targeting Pashtuns living or working in Baloch areas. They have also openly criticized the target killing of Punjabi settlers and teachers by the Baloch armed groups. These have been the major issues dividing the Balochs and Pashtuns.

In the meanwhile, frequent fights between Baloch and Pashtun students at different universities have regrettably added fuel to the fire. Violent clashes between the students hailing from both the sides have off and on resulted in closure of major educational institutions in the province for several weeks. This is a very negative trend which should be discouraged by sane Baloch and Pashtun nationalists. It is the time the elders on both the sides once again taught their kids the history of joint Baloch-Pashtun struggle. Obviously, no political history is perfect.  There have surely been times of differences and mistrust between Balochs and Pashtuns in the past which subsequently culminated in parting of ways between the two dominant forces. Everyone, nonetheless, acknowledges that Balochs and Pashtuns lost more and gained little after parting ways with each other.

It has been a long time since Baloch and Pashtun leaders sat and discussed their mutual problems. The gap is continuously widening in the absence of regular political interactions. There is an urgent need for the Baloch and Pashtun leaders to sit and sort out their grievances. In spite of the mistrust and growing gulf, the Pashtun leadership must be applauded for publically condemning the killing of Baloch leaders in their newspaper statements. The PKMP has also been supportive of all complete strike calls in response to the recent killing of Habib Jalib Baloch, central secretary general of the Balochistan National Party (BNP), and the death anniversary of late Nawab Akbar Khan Bugti.

Another way of rapprochement between the two nations is the reactivation of the dormant Pakistan’s Oppressed Nations Movement (PONM), whose chair is with PKMP chairman Mehmood Khan Achakzai. Some politicians insist that the PONM has become a part of the history because it was only meant to fight  against the Musharraf  regime. With Musharraf thrown out of power, they maintain, the justification of PONM has faded away.

This is a wrong political conclusion. The aftermath of Musharraf’s exit has proved that the Pakistan Muslim League (PML-Nawaz) and the Pakistan People’s Party (PPP) hardly have an interest in the problems of smaller provinces and the so-called “oppressed nations” of the country. Therefore, the smaller nationalities need to unite themselves to gain the power to wage a viable political battle for their rights.

We would like to urge Baloch and Pashtun leaders to resume the process of negotiations with each other and wage a collective political struggle for the rights of the province. A united struggle is in everyone’s interest. Infighting among the members of two major nations living in Balochistan for centuries is going to a futile exercise. The Balochs and Pashtuns should not only respect each other’s rights but also cooperate in guarding mutual interests – Thebalochhal

Floods Cause Rs. One Trillion Loss to Balochistan

Floods Cause Rs. One Trillion Loss to Balochistan