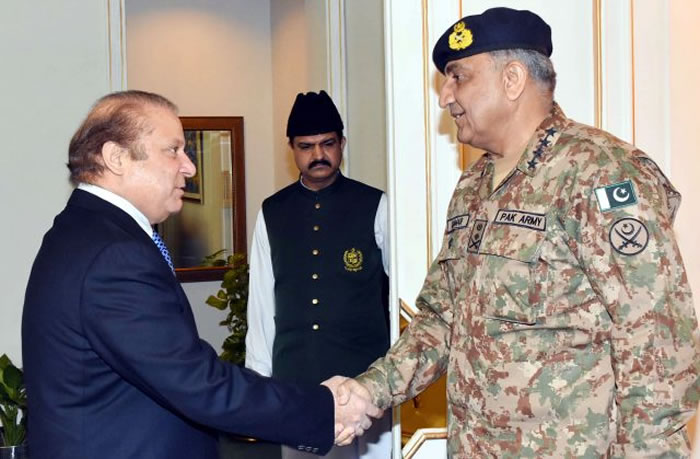 Since very long the de facto rulers of Pakistan is the military and the civilian government is only effective in its given sphere of running the admiration structures. The current PMLN government is trying to assert civilian supremacy over the military but failing due to its own weaknesses. The PMLN government lacks the credibility to turn the tables on the military, so to speak. In 2013 it had an opportunity to do so but failed miserably.

No civilian government can do it on its own and needs to adopt a unified approach encompassing all political forces, media and civil society. In principle the civilian control of the military is a fundamental requirement of democracy and constitutional system. However, given the myriad weaknesses of the civilian government the military has encroached continuously on civilian space, A reversal is possible, though. However, not easy at all. Pakistan’s democracy is now getting very problematic, to say the least. Meanwhile, the performance of the PMLN is dismal at best. Pakistan’s democracy shouldn’t be just about government majority. There is system of checks-and-balances where judiciary checks power of executive. Nawaz Sharif was ousted from power by the Supreme Court of Pakistan very recently in the famous Panama Papers trial but has become the head of his political party again. He is now desperately asserting his power unlike anything seen in Pakistan before. Nawaz Sharif is now challenging the authority of the Army which controls real power in the country.

The irony is that he lost the opportunity to do so. He could have put the Army in its proper place as it has no role in politics whatsoever. Nawaz Sharif lost that opportunity and now has lost credibility. It is now too little and too late, so to speak. Matters can go from bad to worse in Pakistan. God forbid, if there is complete collapse of government, chaos and anarchy in Pakistan then the military will take over the country yet again.