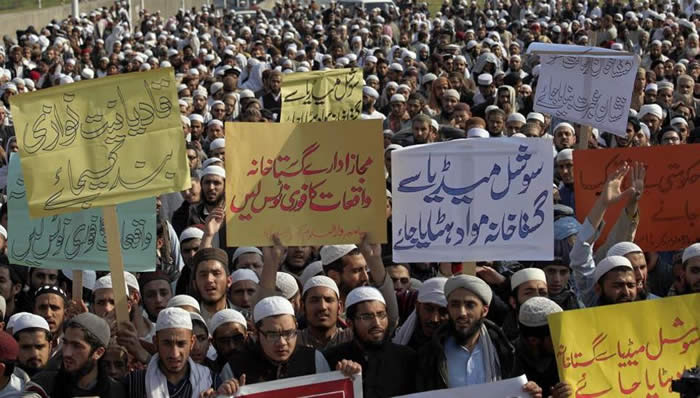 Blasphemy is an impious utterance concerning God, Prophet Muhammad [P.B.U.H] or anything considered sacred in Islam. General Zia-ul- Haq ‘Islamized’ the blasphemy law as a part of a widespread policy of Islamization. The blasphemy laws are now enshrined in section 295 A, B and C of the Pakistan Penal Code, with their focus being on protecting Islam. According to this law any person accused of blasphemy could be imprisoned or fined or even both and according to 295 C the person is sentenced to death before which a trial must take place in a court session with a Muslim judge presiding where there should be proper proof against the accused.

Presently, people in Pakistan use this law at an unparalleled level to anything anywhere else in the world. If a person has problems with someone, all they have to do is accuse that person of blasphemy in front a mob and they can get the person killed very easily without having to prove anything against that person. Since 1990, about 1300 cases about blasphemy have been registered, the following cases have been prominently highlighted:

Read More: Inside of Any Problem Lies an Opportunity

Some were murdered before they could even be sentenced to trials; over 60 were murdered before their respective trials were over, others were acquitted because no evidence was found against them but had to leave the country or their respective cities because they had life threats. The most recent case is of Mashal Khan who is a student of Abdul Wali Khan University, Mardan. Mashal was accused of Blasphemy and murdered inhumanly by a huge mob of his fellow students. Mashal Khan was shot, stripped, beaten and thrown off the second floor of his hostel though they had not seen do or heard him say anything that could have proved him a blasphemer, personally.  How human or Islamic is this act?

Human rights according to Islam state the following rights:

Under the light of these rights according to Islam, no one has the right to kill another person and be proud of it merely because a person has liberal thoughts or in other words only because a person thinks differently. This law has a disproportionate impact on minority communities. Over 50% of blasphemy cases have been registered against non- Muslims. According to most of the Hanafi jurists, if the blasphemy law was based on the teachings of these jurists then it would not have been applicable on non-Muslims. “Imam Abu Hanifa said that a non- Muslim will not be killed on the basis of Shatm-e- Rasool (Blasphemy against Prophet Muhammad). The Shirk that he is already committing (being a non-Muslim) is a much bigger crime (and we would not kill him for that).

According to Maulana Maududi:

“The rights of dhimmi (non- Muslims) living in a Muslim state include protection of his life even in instances of blasphemy.  According to the above discussion it is quite evident that the blasphemy law is being used wrongly by the people of Pakistan for personal or political motives and this is becoming a serious issue that can cost a person their life if they are accused of it.